Like their road-loving brothers who stuck to the roads and built café racers, scrambler builders were a different lot. They wanted something they could ride to the dirt and race once they got there.

They stripped their bikes to make them as light as possible, threw on knobby tires for traction and spoked wheels for stability in the dirt, added taller suspensions and high exhaust pipes for additional ground clearance then waited eagerly for the green flag to drop. Hopefully, nothing broke and they were able to get home that night so they could do it all again the next weekend.

They were the dual-sport bikes of the day and enjoyed a significant popularity until being relegated to the backs of garages or scrap heaps as manufacturers caught on to this new niche and began building real dirt bikes. 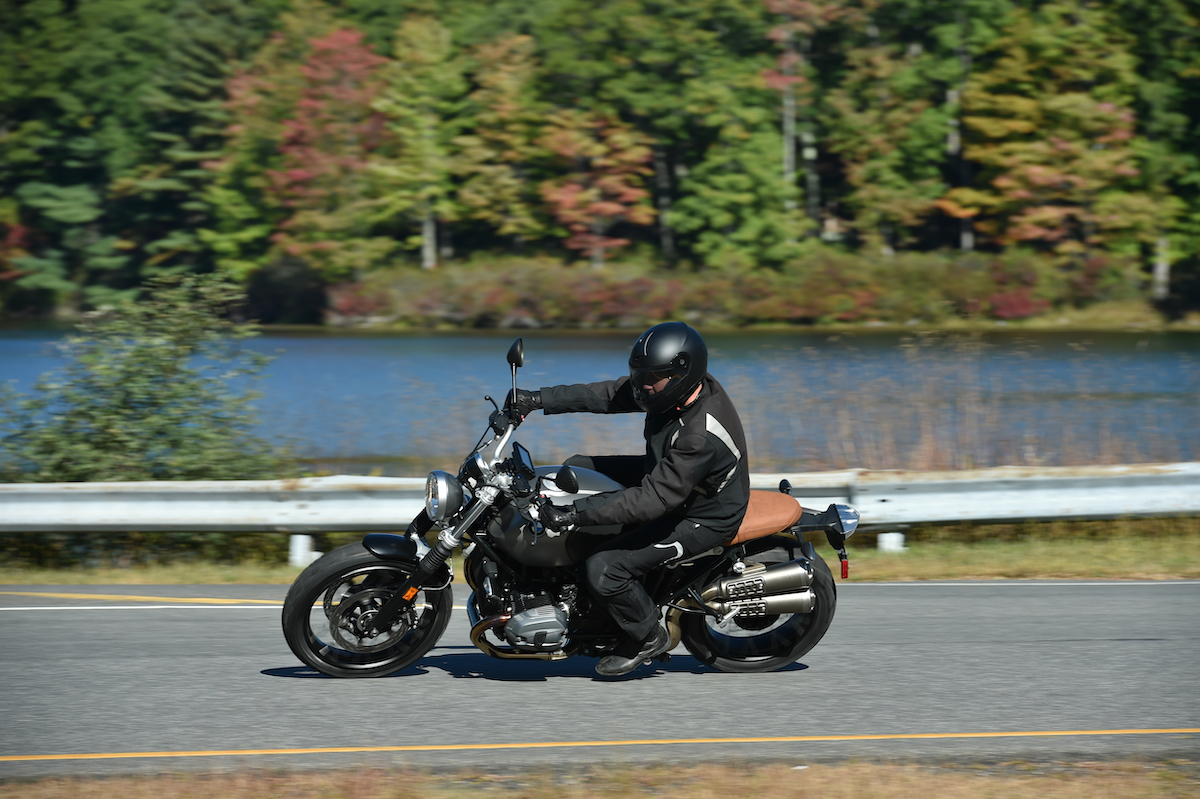 As far back as 1951, at the International Bicycle and Motorcycle Fair held in Frankfurt, Germany, BMW Motorrad presented an early “Scrambler” in the form of an R 68 with a raised 2-into-1 exhaust, just like the one raced by BMW Motorrad legend Georg “Schorsch” Meier. While the standard version of the R 68 used a conventional lower exhaust, even then a raised exhaust was available as a BMW accessory. To this day, some owners of this highly valuable post-war classic still prefer the scrambler-style exhaust. 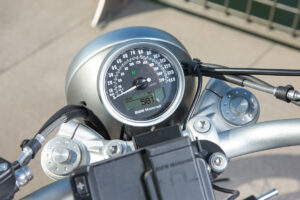 Fast forward 50 years or so and the custom build and retro markets are red hot with scramblers at the top of the charts. Triumph got the retro chic ball rolling early and has since been followed by others including Ducati, Moto Guzzi and Yamaha.

BMW Motorrad realized the market opportunity more than three years ago when they released the R nineT, their naked bike built with personalization in mind. With sales of the R nineT far exceeding BMW Motorrad’s conservative sales projections, BMW executives believed they had struck gold. To see exactly how deep the retro vein goes, the R nineT Scrambler, the first of four new iterations of the R nineT, has been released. 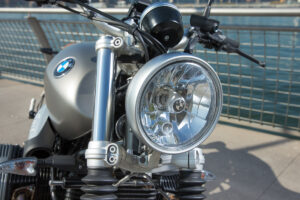 What isn’t immediately noticeable is a bike that’s four and a half pounds lighter with a wheelbase nearly two inches longer and a taller seat height. Don’t forget the lower sticker price, either, with the Scrambler at $13,000 vs $15,095 for a standard R nineT.

Like the original R nineT, the Scrambler is the brainchild of BMW Motorrad designers Ola Stenegard and Rolan Stocker, custom builders themselves with their fingers on the pulse of the custom building scene. 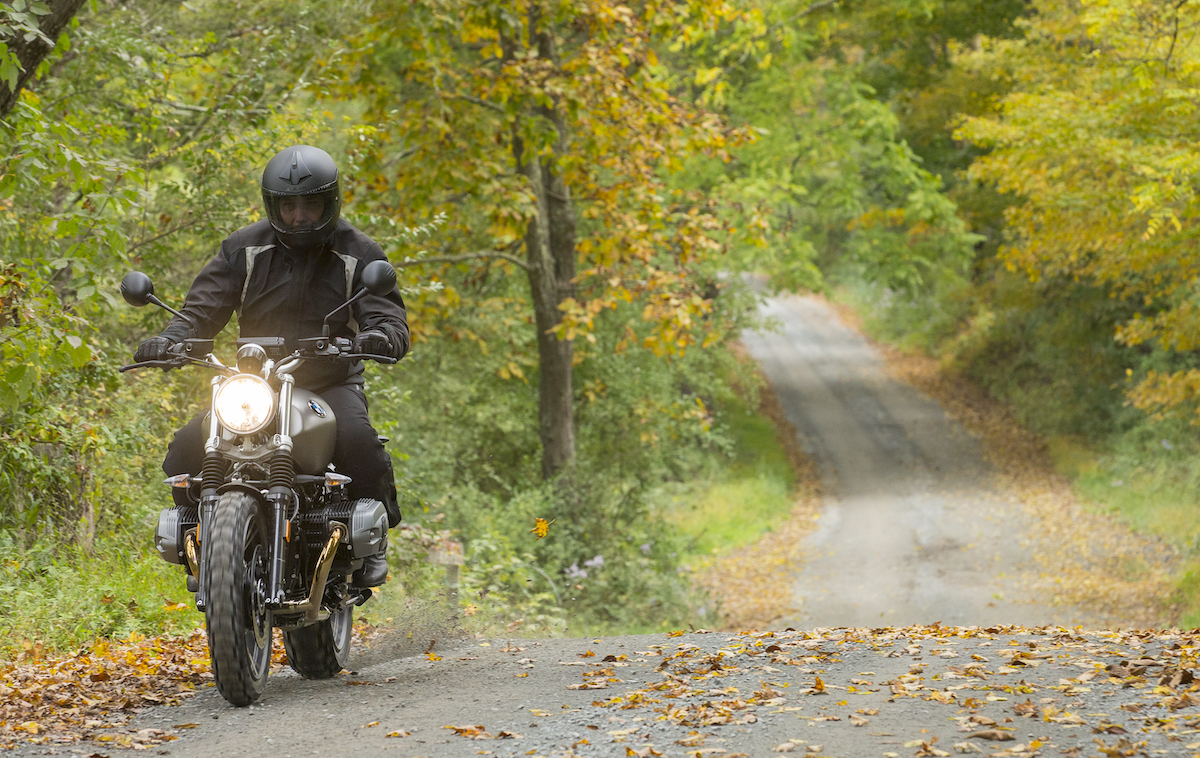 Creating the Heritage series of motorcycles for BMW represents a significant departure from the company’s typical mode of operation, where stopping distances and acceleration numbers are typically some of the most important measurements. For the guys and gals customizing old Beemers, the emotional link felt between rider and machine was a driving force equal to the ability to customize. 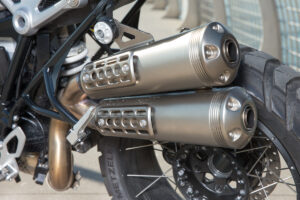 In the case of the standard R nineT, according to Stenegard, “you jack it up and you have a Scrambler, you tuck it down and put a fairing on it and you have a café racer.”

To meet the desires of their owners, BMW R nineT Scramblers can be personalized in many ways. Remove the rear frame section and bolt on a solo seat and the bike assumes an entirely new personality. Swap the stock light alloy cast wheels with a cross-spoke set with some knobby tires, then throw on a skid plate and you’ve got a bike capable of light off-road use. With accessories available through BMW, Roland Sands and elsewhere, the possibilities are endless.

To officially introduce the Scrambler to western journalists, BMW NA brought us to a lodge in Hamburg, New Jersey. Following the BMW MOA Rally held last summer it was an interesting coincidence to visit another city of that name. 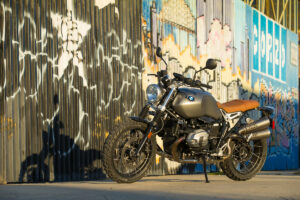 Despite preconceived notions about the quality of riding in New Jersey, the further one gets from Newark, the more one understands how the third state to ratify the U.S. Constitution became known as the Garden State.

For our first day of riding, the area offered up a perfect landscape complete with twisting country roads and muddy gravel paths through scenic High Point and Swartswood State Parks, the Delaware Water Gap National Recreation Area as well as the beautifully quaint towns along the route.

For me, having racked up most of my miles during the last year and a half on an S 1000 XR, it was nice to sit on the Scrambler with both feet flat on the pavement below and my knees bent. Surprisingly, I found the thin, one-piece, quilt-stitched seat comfortable and my reach to the handlebars natural. Though a BMW Navigator V was fitted, a simple speedometer provided nothing more than the most basic riding information and in true Spartan scrambler style. A lonely low fuel light offered an indication of the need for gas, returning riders to the days of resetting a trip odometer at every gas stop to monitor fuel. In addition to the standard ABS, the bike I rode had been outfitted with cross-spoke wheels, Automatic Stability Control and Metzeler Karoo 3 tires. It was time to ride. 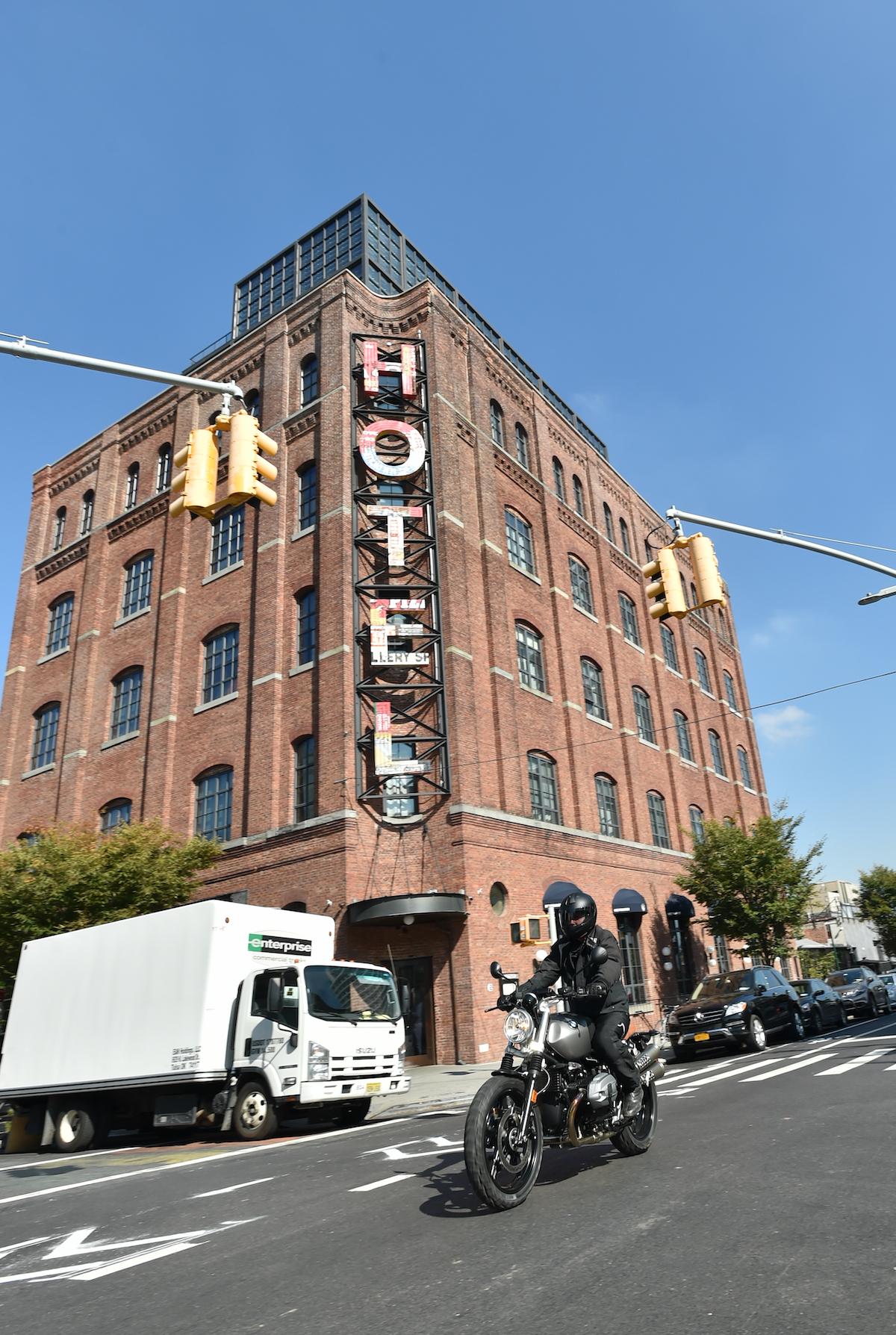 Thumbing the starter brought an immediate smile as the boxer engine roared to life with a sharp bark resonating from the twin Akrapovic mufflers and the familiar feel of the rotational torque when revving the motor. As much as I love the inline four of my XR, it was good to be riding a boxer again.

Pulling out of the lodge parking lot, I was taken aback by the heavy feel of the front end. Maybe it was the knobby Metzelers, but maybe I simply needed more than 50 feet of riding to make a realistic evaluation. I knew time would tell, so I upshifted to second gear and roared onward.

Our route that first day took us over the good asphalt roads of northern New Jersey through the hilly and scenic countryside. Just as I experienced when I first rode the R nineT more than two years ago, I soon found the tighter riding position of the Scrambler giving me leg cramps (which luckily faded as the miles accumulated). 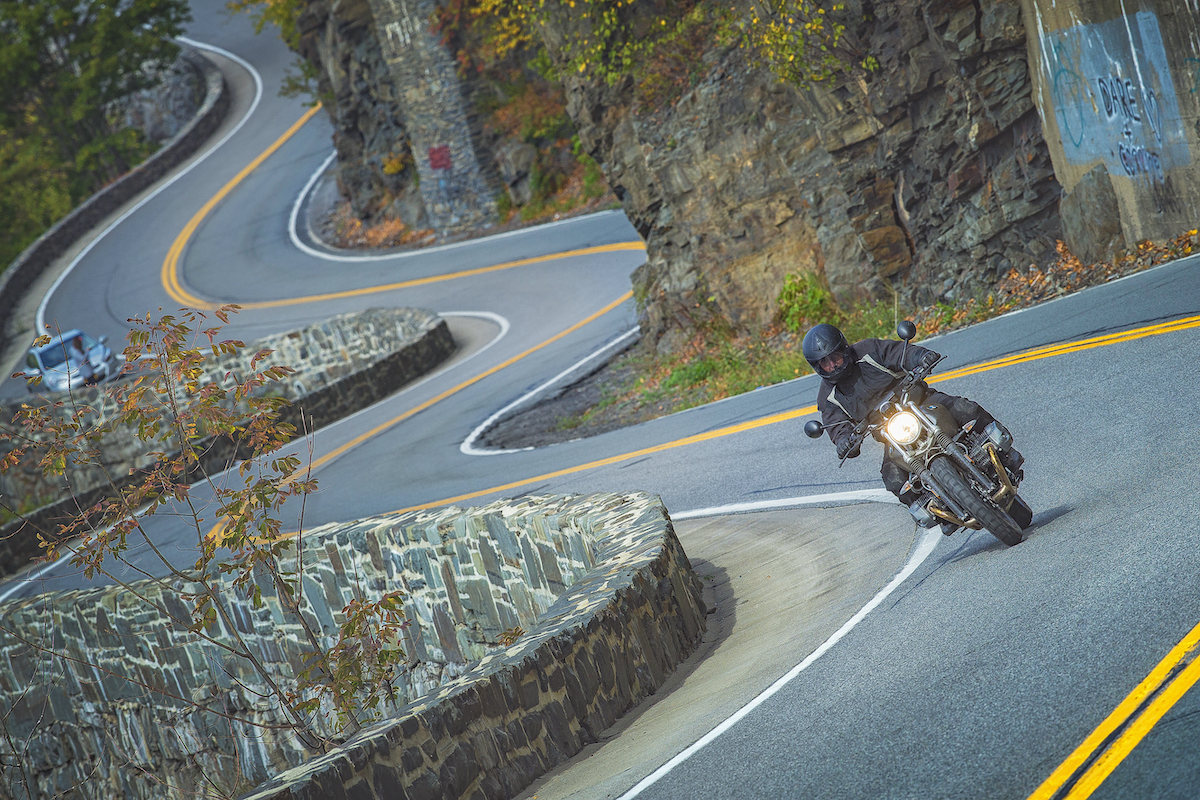 Though the Karoo 3 tires never let you forget they’re not road tires by their constant whine and vibration, secure traction was never an issue and the stump-pulling torque of the quick-revving boxer motor was always able to produce a smile.

Lightly traveled highways and county roads took us deep into the Delaware Water Gap National Recreation Area bordering the Delaware River and down the unpaved Mountain Road to Buttermilk Falls, where the spectacular 200-foot waterfall cascades down the mountainside just a few feet from the road.

Recent rains left Mountain Road sloppy and wet, and riding the Scrambler off smooth pavement gave me a renewed appreciation for those riders who decades ago regularly took their bikes with limited suspension travel off-road or to the track. With only 4.9 inches of travel in front and 5.5 inches in the rear, I constantly felt the suspension bottoming over the bumps and water-filled potholes I found on the gravel.

Continuing through the New Jersey countryside, we crossed the border into Pennsylvania via the Dingman’s Ferry Bridge, the last privately owned toll bridge crossing the Delaware River and one of the last such bridges in the United States. 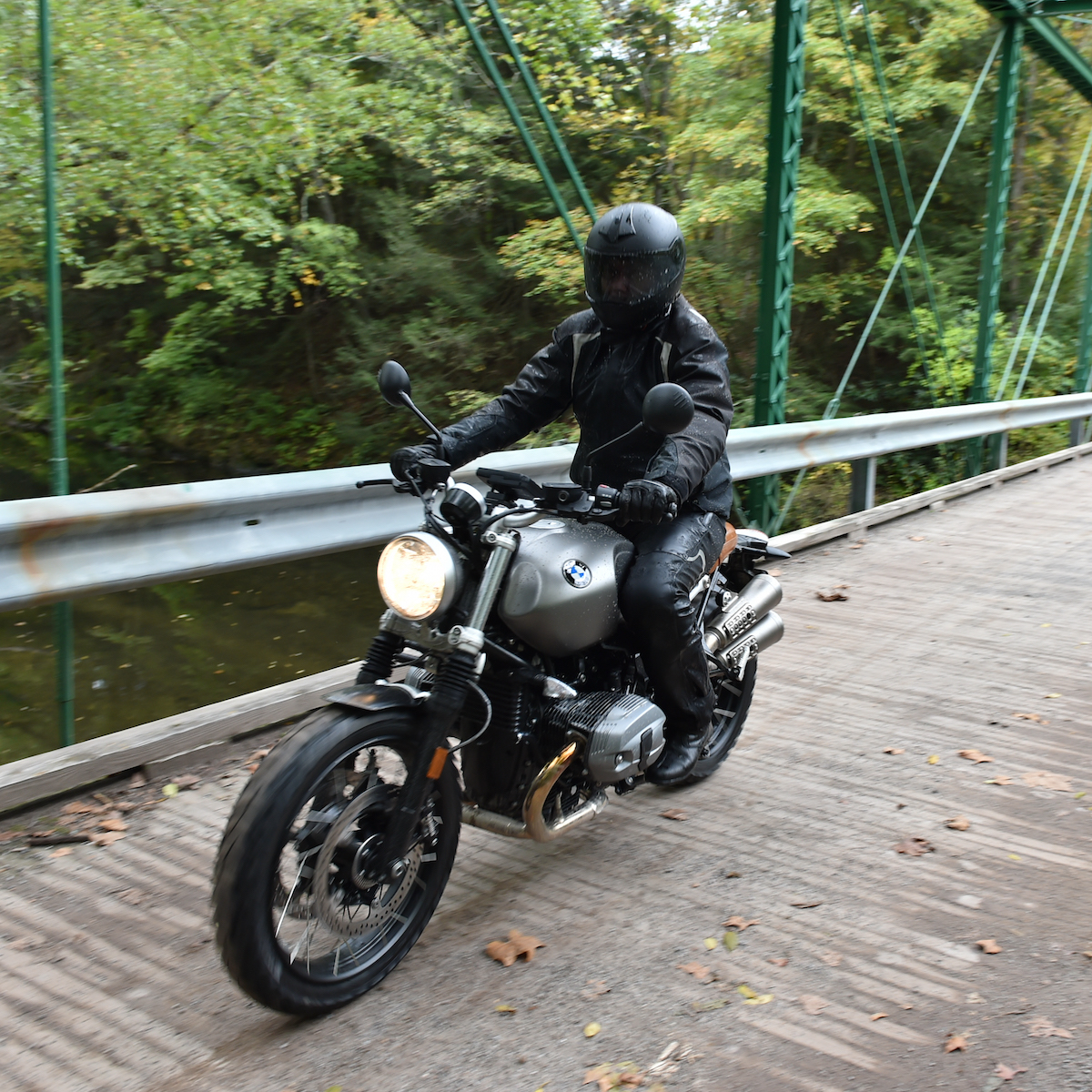 Later, riding along Highway 97 another road sign welcomed us to New York and soon we found a tightly winding section of road along the Delaware River known as the Hawk’s Nest. Not only a popular location used for television commercials, the Hawk’s Nest is an awesome road for riding a motorcycle that wiped away any lingering doubts regarding the quality of the motorcycling roads in the upper New Jersey area.

As with any bike, as the time in the saddle grew, so did my familiarity and confidence in the Scrambler’s handling and motor. By the end of our first day of riding I found the R nineT Scrambler a great bike for tearing up twisting country roads as well as light dirt duty. Our ride into Brooklyn the next day would reveal its ability as a commuter.

Once the early morning fog burned off the mountains, Highway 17 brought us to Bear Mountain and the Perkins Memorial Tower, where visitors are treated to a spectacular 360-degree view of the Hudson River, Harriman State Park, the Palisades and more. From there, I-287 took us across the Hudson River via the Tappan Zee Bridge and toward Brooklyn amid an ever-growing surge of traffic. 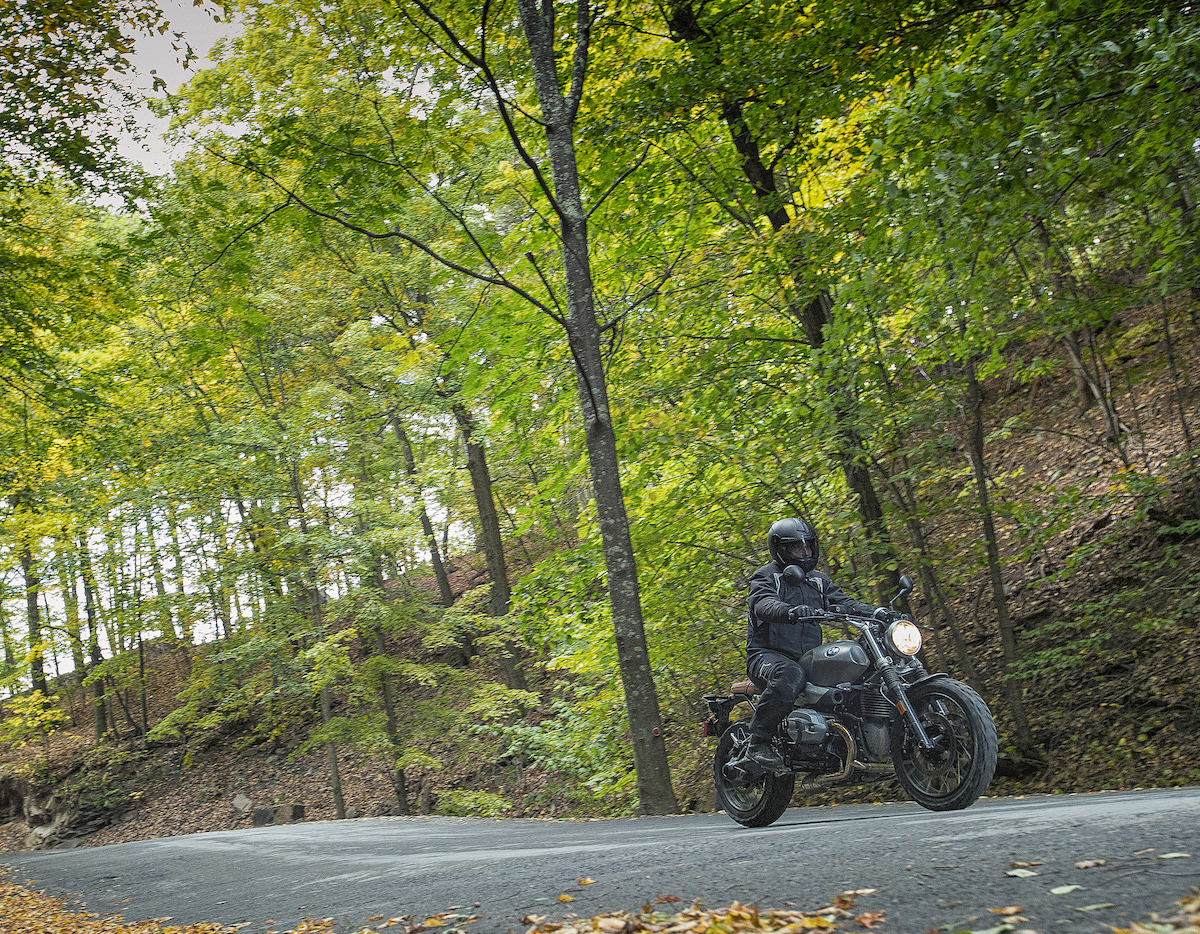 As far as pulse-pounding rides go, motorcycling into Brooklyn during rush hour is as exciting as any curvy mountain road I’ve traveled, but I wouldn’t recommend it. Trying to keep our group of six riders together was an e-ticket ride to be avoided at all costs.

Despite our thrilling ride into the city, once there, the Scrambler seemed even more at home than it did in the country. Its light handling, quick acceleration and awesome brakes make weaving through the tight and congested streets while dodging delivery trucks, cars and pedestrians a ballet performed with an Akrapovic soundtrack. Add a backpack or messenger bag and you’ve got a fantastic commuter bike able to get you to work faster than a car or cab and capable of getting you out of the city whenever you feel the need to escape and breathe clean air.

I really like all motorcycles, while preferring some over others. The R nineT Scrambler probably won’t be anyone’s first choice to take them across the continent, but as a fun canyon carver or commuter able to become uniquely yours and deliver an emotional and satisfying ride, BMW’s newest addition to their Heritage lineup brings riders back to a time not all that long ago when the ride was about you and a simple motorcycle.

PS The headline refers to one press launch rider who did indeed crash (and destroy) a brand-new R9T Scrambler. 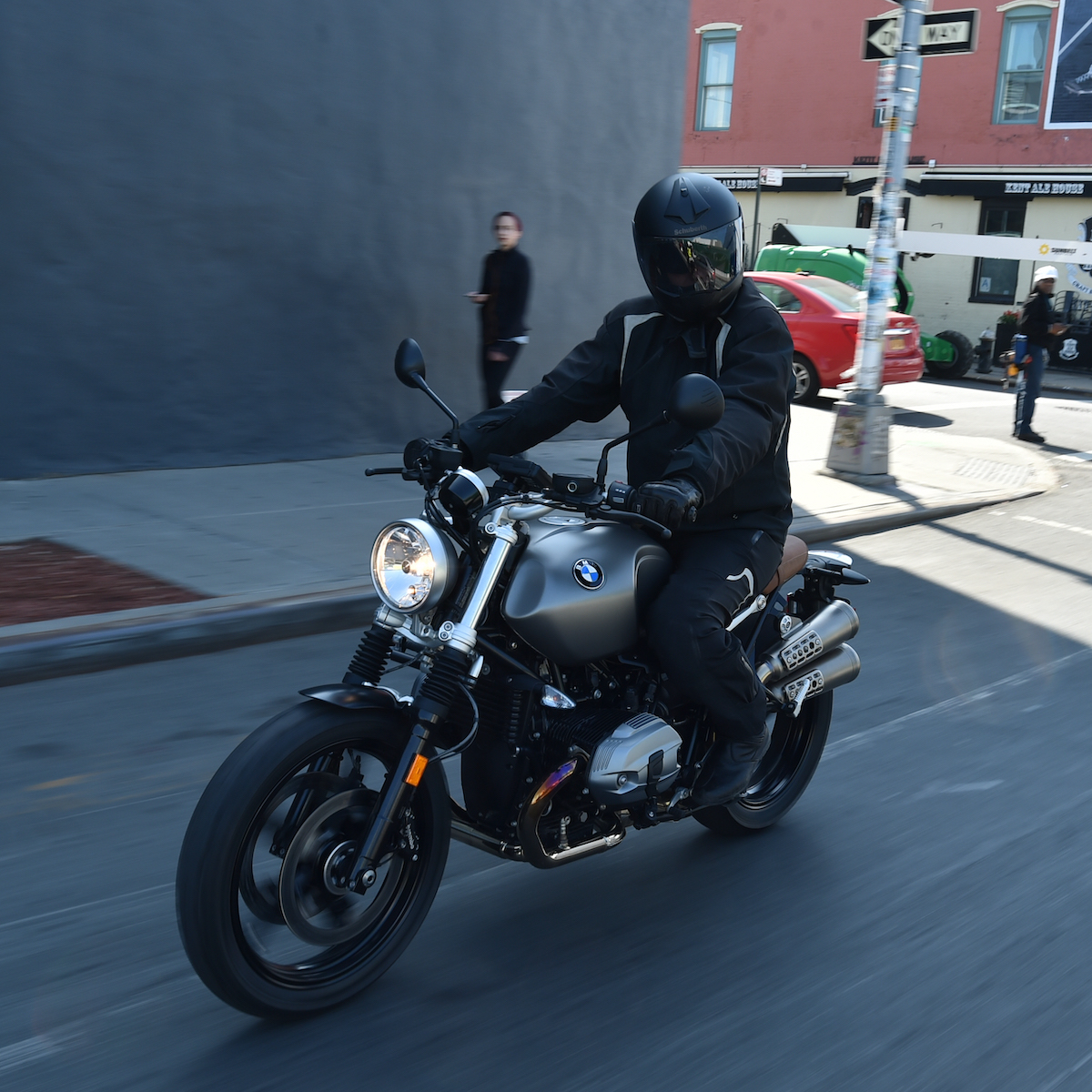 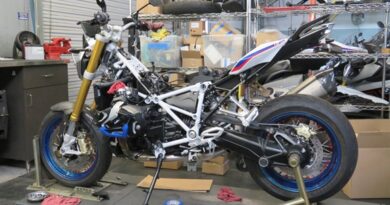 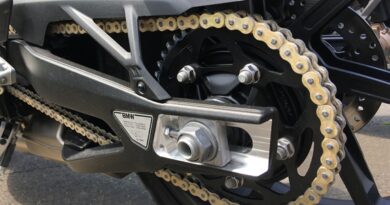 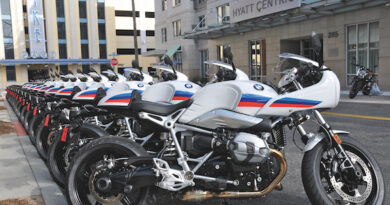