When I’m asked why I ride BMW motorcycles, I always give three reasons: the design and quality of the motorcycles themselves; the camaraderie of the BMW motorcycle riding community; and the support of Heid’s Hodaka and BMW, an “old school” motorcycle shop located in scenic Johnsburg, NY. While the patriarch of the Heid family, Bill, passed away a couple of years ago, the shop remains vibrant under the able hands of the Heid family – Bill’s wife Teri and his son Paul. I’ve met plenty of motorcycle mechanics over the years and without doubt, Paul Heid is the best one I’ve ever seen.

Frank Palmeri: How did you get into motorcycles?

Paul Heid: I started out racing motorcycles. My dad always was into bikes, and he got me started with Rupp mini-bikes. When I saw him on one I had to have one so that’s how I got started. Then he got into Hodakas and started selling them, and a year or two later I started racing. 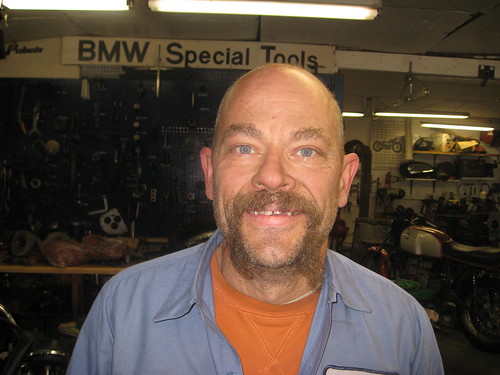 FP: How old were you when you started racing?

FP: When did you know motorcycles would become a career?

PH: From when I was an adult I always worked at the shop at least part time. When my parents went on vacations I used to cover for them. I never really planned on making it a career, but other jobs I had didn’t work out so well. Then in October 1984 my dad asked me to start working here full time.

FP: Your dad was obviously a big influence on you as well as a good father. How did your dad help shape you into the man that you’ve become?

PH: The biggest thing was his work ethic and his business ethic. You treat people properly. If you do something wrong you make it right. If you make a mistake or have a problem you fix it. That’s how you keep people coming back, you make it so they can trust you. And that’s how he was. Even if the mistake wasn’t our fault, if it was under our warranty we fixed it.

He supported us well. He did with less so we could race. He worked full-time in the wood logging business, and started this place part-time selling snow-mobiles. Then we opened full time in 1969 and it’s been going since then, first snowmobile repair and then we started selling Alouette snowmobiles. When they went out of business we sold Arctic Cat snowmobiles for a while. Then we sold Polaris snow-mobiles until around 2002. As you know we sold new BMW motorcycles, but we were too small of a dealer to keep selling them.

FP: Did you ever consider any other career?

PH: I went to mechanical engineering school, but this just took over.

FP: Heid’s is a small family owned and run shop. What’s it like working with your mom and brother all day?

PH: It’s been so long that we’ve learned each others work patterns, you can almost anticipate what’s going to happen next. You still have family squabbles and what-not, but you have to get along if you’re going to last this long.

FP: I know you went to BMW motorcycle school. What was that experience like?

PH: Great. When I went to BMW school it was still in-house training, so they had very, very good technicians working with us. Craig Etzel was one of my teachers, and he was just super. He had a real you do it right work ethic, very much like my father. Details matter tremendously in this business. For example, we have people come in here all the time wanting services, and the first thing we do is check their tire pressures. You would not believe how so many riders let this simple thing go unchecked – blissfully unaware, to put it mildly.

FP: Even now some riders won’t ride anything but BMW airheads. Why do you think these old bikes still have such a strong and loyal following?

PH: For one they’re reliable as gravity. And two there’s the KISS principle -Keep It Simple, Stupid. It’s just a simple, by today’s standards, piece of equipment. Airheads are great – time marches on, yet they remain where they are. Other bikes have gotten better, but they are still that good. Take an early Slash 5. Find me another motorcycle from that era that you can still ride so many miles without having to do major work on. I consider the pre-Slash 5s as more collectible than ridable, but Slash 5s and on are such good, reliable motorcycles they can be considered ridable collectibles. They are just competent motorcycles that did everything well back then and they still do.

FP: How do BMW motorcycles stand up to other brands you’ve worked on?

PH: All brands of bikes have quirks and problems, no brand is exempt from that. Still, I believe if you look at the fit, finish, and quality of BMW motorcycles it’s still exceptional. Other companies have improved but I still believe BMW has an edge. All companies have gone to less maintenance, and maintenance is now easier for the technician like cartridge oil filters. Harley-Davidson is a perfect example. I hated working on the old iron-heads, but from the Evolution engines on everything is just so much better. It seems like it’s just easier for technicians to work on the modern bikes.

FP: You fixed my son’s Ducati by sourcing a neat, programmable ignition module from New Zealand, and you found the problem in the cold-start circuit on my Norton’s carb. How is it you can work on other brands so easily, when you’re not even trained on those brands?

PH: An engine is an engine. You have the same basic things required for every engine to run. Also, something we never used to have, there is now a plethora of information available on the Internet. It’s a great resource, you just have to sort through it carefully.

FP: How do you stay motivated to keep doing your best work?

PH: I just love motorcycles. I like nothing more than to get on one and I feel that my customers want the same thing. There’s nothing more frustrating than a mechanical device that just does not work properly.

FP: What is your opinion on new technology working its way into street bikes, like traction control and ride-by-wire?

PH: It’s the natural progression. Makes it more complicated, but makes a better beast. You have more potential for failure but systems in general have gotten more reliable. A good example is in snow-mobiles. They  could have had two-stroke direct-injection a long time ago, but were waiting for the processing power in the control electronics to improve enough. You have tremendous ability in small computers, might as well take advantage of it.

FP: What in your opinion is the most dependable motorcycle ever made?

PH: K bikes. I’ve seen more high mileage K bikes in here that require less work. Go look on eBay and see what a used K 100 engine costs. You can buy one for dirt because they don’t wear out. Compare that to a used R 100 engine which will cost you and arm and a leg. We have two used K bike engines here that we will probably never sell because they don’t ever break. Remember K bikes have the first generation of computer engine management which means the engines run right and are under a lot less stress. We’ve had other high mileage bikes come through here, like Gold Wings, but almost all of them have had something major done to them. We had a K 75 RT in here a few years ago that the guy never did anything to with 230K miles on it. It was ragged, it needed some love, but you turn the key and it started and you could have ridden it to California. The drive lines on the K bikes are bullet proof.

FP: Shaft drive is a hallmark of BMW motorcycles, yet many final drives have failed. What’s your take on this?

PH: Inadequate engineering testing over time, plus financial constraints. Then consider how often these bikes are over-loaded. How many riders even know what the GVWR (gross vehicle weight rating) of their motorcycle is? The K 1200 LT used the same final drive as the K 100. You never had “big mama and the picnic basket,” to use a phrase from one of my BMW school instructors, on a K 100. A lot of these bikes were just grossly overloaded. Perhaps the design of the final drive was at the outer limits of its capability. We’ve seen some that have gone 100K+ miles and never had a problem, while some fail at 20K. I think if, as the bikes got heavier and more powerful, the final drive design would have been beefed up accordingly, there wouldn’t have been as many problems. Real world function is very different from factory testing.

FP: If you had a direct line to BMW, what kind of motorcycle would you ask them to build?

PH: Simple. Keep innovating, like with the water-cooled twins, but keep it simple. I’d love an R 1200 GS that weights around 300 pounds, but I know it’s impossible. There’s a saying I like: “never trust a motorcycle you can’t look through.”

FP: What do you think of 200MPH bikes like the S1000RR being sold for street riding?

PH: Fantastic. However, the one thing we don’t  have in the US is tiered licensing, which is a mistake. In other countries you start out on a small motorcycle and work your way up. Responsible use of your throttle is the key. Just because you have it doesn’t mean you have to use it. And it’s up to us motorcyclists to police ourselves. I always tell kids coming in here they don’t want a crotch rocket to start with.

FP: What tips do you have for a dedicated owner who wants to work on his own motorcycle?

PH: Learn. Read. There is so much information available on any motorcycle, especially the older stuff. Find a buddy who has your bike and learn from their experiences.

FP: What’s the most fun you have on a motorcycle?

PH: Dirt roads on my custom dual sport. That’s how I started and what I alway go back to.

FP: If you could ride anywhere in the world, where would you choose?

PH: That’s a tough call, but the town of Johnsburg has a hundred miles of dirt roads so I’ll say right in my back yard.

FP: What are some of your other interests besides motorcycling?

PH: Hunting, fishing, hiking – basically anything outdoors – and listening to music, as well as being a volunteer fireman.

If you find yourself at Americade in Lake George, NY or in the Adirondack Mountains for any reason, be sure to visit Paul and the rest of the Heid family at Heid’s Hodaka and BMW, 2033 Garnet Lake Road in Johnsburg, NY. 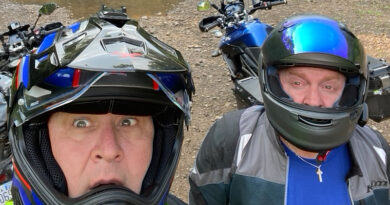 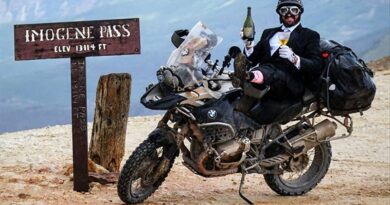