The last time I rode my own motorcycle was about 35 years ago. I really enjoyed that BMW R 69 S. Unfortunately, I had some issues with it and making a foolish decision, sold it. I have always regretted that decision, and whenever I saw a motorcycle on the road I missed my BMW.

Fast forward to the 21st century and here I am once again thinking about motorcycles. My brother-in-law has a couple and we do talk about riding when together. He tells me how much fun it is and I tell him how much fun it was. He has modern technology and creature comforts on his bikes and I tell him he’s a wuss. In my day, if it rained, you got wet; if the crud came up off the road, you wore it. We had no radio, cell phone, GPS or heated riding gear. I lie about how tough I had to be to ride without all this sissy stuff. Not only that, I didn’t think I was hard up or deprived. I got where I wanted to go and back and had fun. That was just the way it was. It was fun recalling those rides.

In 2003, I was once again visiting the wuss-in-law. As I walked through the garage to the house I saw a BMW motorcycle which all of a sudden became the theme of my visit. He showed me the motorcycle, of course. He rode it around the block so I could hear it and then he let me ride it. It had been over three decades since I last rode a bike and this one was radically different from mine. This was a BMW R 1150 R and there was no comparison with my R 69 S except for the BMW logo.

It’s here that I should point out that thinking about a motorcycle is like the thin edge of the wedge. I knew I couldn’t get one, yet I found myself thinking about them, noticing them on the streets and walking over to look at parked ones. It is like an itch that has to be scratched and the harder one tries to ignore it, the itchier it gets, especially for a lapsed rider. I would even have dreams of riding my old R 69 S.

I call these things gradient responses (GR) — little graded steps in thought, idea or attitude building up to a sometimes unknown conclusion. An example of a GR in 2005 was going to the Toronto motorcycle show with a friend. I had no reason to go, but I did.

After my visit to the wuss-in-law, I noticed motorcycles more often and began talking with my wife about them (GR). She has no interest whatsoever, but since I do, she listens. She’s kind to other dumb animals, too.

One day my wife and I drove from Mississauga to Kitchener and back. I thought, “If I had a motorcycle I could have ridden this distance with no stress.” (GR) I had a similar little bike thought when we drove to Stratford and headed home in mid-afternoon, a round trip of about 250 kilometres. It was a nice outing and much appreciated by both of us. We saw about 10 motorcycles that day. That was a bit surprising considering the temperature, but it was sunny and I could have been riding if I had a bike, especially one set up for touring with a fairing (GR).

In 2006 my wife and I drove up to Big Chutes in Ontario to see the marine railway lock. It was quite interesting and we were able to see it in operation as it lifted boats out of the water and took them to the next lake on railway tracks. There were all kinds of people there, including four seniors who rode motorcycles from Lindsay, Ontario. See what I remember from that trip? Motorcycles! (GR!)

In September, we stopped for some gas on the way to visit the Wuss, and as I came out of the store I saw two guys with motorcycles. I stopped to talk and they were riding a BMW R 1150 R and a Yamaha FJR, the same bikes my wuss-in-law had (until he sold the BMW). They were going up the coast to Minnesota Highway 1 and taking it to Ely. They said the road was great for motorcycles — hilly and twisty. Sounded very nice to me (GR).

The next day my brother-in-law and I went for a short ride on his motorcycles. I was very intimidated by the bike and its power, but plucked up my courage and rode. I hadn’t ridden since my last visit and it turns out the 85 horsepower BMW was touchier than the Yamaha FJR. I am pleased to report I didn’t fall off. I really enjoyed the experience (after a while) and it was the first time I’d ridden a bike with a full fairing. It makes quite a difference in comfort. (Big GR)

We went out for a second, longer bike ride. The weather was excellent and we rode for a couple of hours. We even went on the interstate for a bit and I was able to handle it, pleasantly surprised at the stability of the bike when passing a big truck. At one point, we stopped for a break and I suggested the ride be extended. “Wow, I could get back into motorcycling so fast my head would spin,” I thought (GR).

We immediately planned a much longer ride for the next day, Sunday morning. Unfortunately, this failed to happen because the Honda Gold Wing had a nail in the tire and it couldn’t be fixed until the next day when I was leaving. Too bad, but better safe than sorry. We could always ride another day without any risk. (GR)

December 2006 and Canadian winter — I’m talking with Robert, a former motorcyclist, about going to a motorcycle show. At the same time, I’m thinking, “Why go and look at something I can’t afford and don’t have?” We went. (GR)

A year later and for more than a month I’ve been almost mental about motorcycles. I even emailed someone selling a BMW R 1150 RT (GR). He is willing to sell, but since it needs brake pads and a new front tire, I’m not ready.

In addition to this, there is the motorcycle show starting today in Toronto. I thought I’d like to go (GR), but have the feeling I’m not going to make it. When asked why not I say, “It isn’t pretty seeing a grown man cry.”

I continued to spend time looking up BMW motorcycles for sale (GR). I found several K and R models that I could afford to buy. However, I’ve yet to go and look at any of these machines. Robert thought I should consider the K 75 police bike up for sale. He felt it would be a well-maintained bike and it had the full fairing and panniers. I may ask him to look at it with me (GR).

My wife and I went to see the ex-police K 75 RT. It was not being kept under the best of storage conditions. It still had a licence plate and it started up with no trouble. There were some chips and a small crack in the right-side fairing near the trailing edge. The gas tank had a dent in it. I was sorely tempted to buy the bike if only to get it into a better storage area than the open shed where he had it. There was snow on the saddle. The poor thing. Do you see the emotional reaction when I should have been coldly objective? Danger zone!

“If you can get this bike for a reasonable price, take it,” my emotions say. “Shut up, emotions,” I reply. I talked with Robert about the bike and he coached me about buying it and what I need to do. I’m not up to haggling over prices or even how to do it.

I remained in the throes of Motorcycle Buying Syndrome after thinking, breathing and talking about one for months. I found one that I’d like to buy but I’m not sure I’m willing to pay the asking price. I think to myself, “emotionally you are already the owner of this bike.” Forget gradient responses, I’m doomed. If/when I buy it and get it home, I will need riding gear. I absolutely must have a helmet. I’ll also need gloves and boots. I probably have enough clothes that I could ride without buying more riding gear. I may not even need the boots, but these three items are protective gear and it would be sensible to have them. Finally, I need to ride, ride, ride in order to develop my skills, confidence and learn about this bike. I can use the commuter train parking lot on weekends for slow riding practice and in the spring, get into an “update your riding skills” class. (GR)

In January 2008, my friend David and I went to the motorcycle show and I saw a lot of things but bought only a pair of cheap gloves. They probably won’t last very long, but they are gloves. David, another re-entry rider, bought gloves, a helmet and a jacket.

I talked with Robert that evening and he offered to help me get riding gear at the show the next day. We went — me for the second day in a row. Robert was fantastic! He bombed around the helmets, jackets and boots sections sizing me up and fitting me out. He knows his stuff. He did me a great service.

As you must realize by the fact I bought riding gear, I had also bought the K 75 RT. The bike is waiting in my garage for spring. I’ve already booked a class in preparation for riding once winter is over. In the meantime, I got a BMW MOA membership and I’m reading the Proficient Motorcycling books before re-entering the world of 21st-century motorcycling.

Six years* and 90,000 kilometres later, bike and rider are still together and preparing for another riding season. The only problem is I’m starting to think about a GPS. 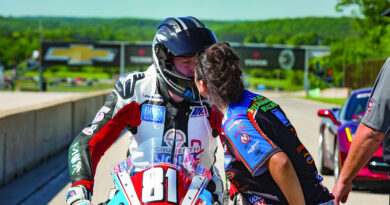 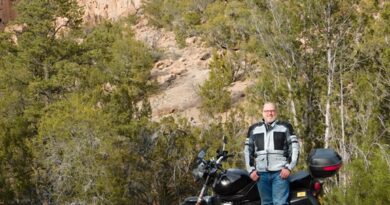 Relearning after 35 years on the road 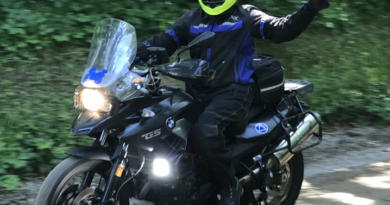 My year of discovery

Every generation has its own apocalyptic fears based on the events and possibilities of its era. This fact can be