Jerry Jeff Walker starts his song “Got Lucky Last Night” by saying, “This is what can happen to a guy with no money and no brains.” This is my story. 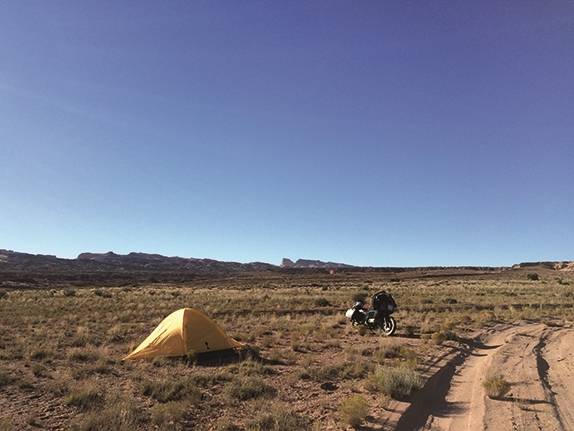 I’d lived in northern Colorado for over a year, but hadn’t yet taken a good, multi-day epic journey west over the mountains. Friends advised that Utah was best seen in October, when the desert weather was cooler, the kids were back in school, and most of the Cruise America RVs were parked for the season.

October it was. The first strategic need was to time my transit of the Rockies when the temperature at elevation was tolerable to ride. That meant leaving the Fort Collins area mid-morning to hit the higher passes around midday. Leaving then had the added benefit of letting the Denver traffic settle down so I could quickly scoot around the city and head west. 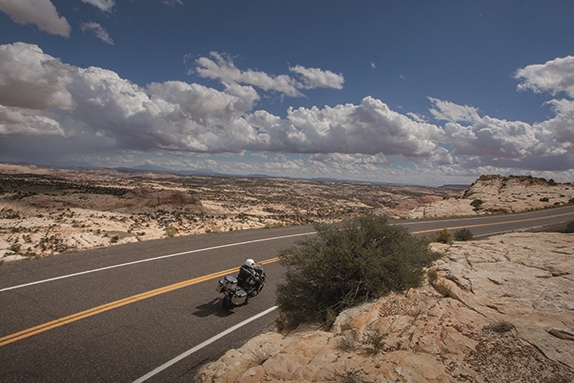 My planning fell apart about two hours into the trip. It does snow in the Rockies in October. In fact, traffic was backed up at the Eisenhower Tunnel. The trickiest part was starting and stopping every 50 feet, uphill, in a couple of inches of icy slush. With boots dragging, I coaxed Katie (Katie Lady, Tried and True, my 1985 K 100 RT) up to and through the tunnel, and continued west.

Wearing some pretty big gloves but without heated grips, my cold hands forced me to stop at one gas station and two rest areas in the first 200 miles. After the second rest stop, near Glenwood Springs, as I was pulling back onto I-70, I began to suspect this trip was cursed. 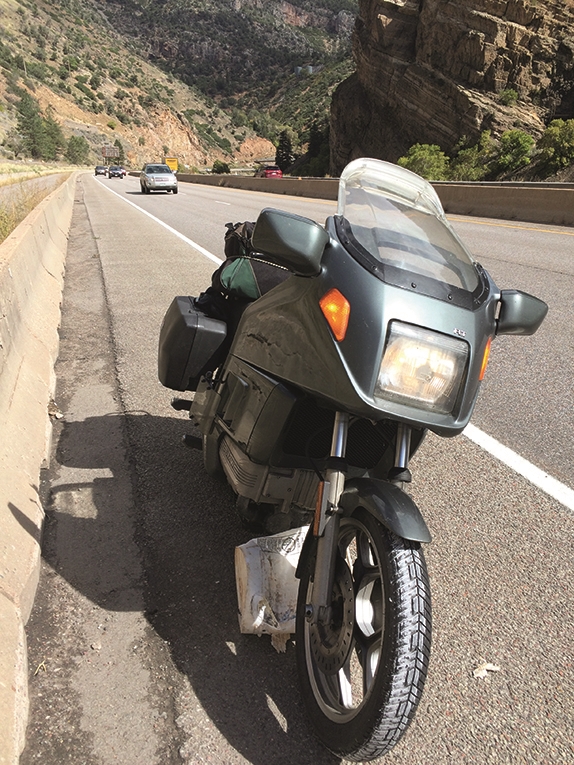 Approaching another tunnel at a BMW rider’s liberal interpretation of the speed limit, my peripheral vision caught a white something skittering from right to left into my lane. Growing up in Iowa, they teach us “Don’t Veer for Deer.” Heck, I didn’t have time, anyway. About one-point-nothing seconds later, a five-gallon plastic bucket kissed my front tire. The impact was negligible, really, which in my mind totally justifies not riding too slowly, right?

I had the presence of mind to glance at my mirrors as I entered the tunnel, and was vaguely puzzled not to see shards of plastic flying in my wake. Within a couple of miles, I started sniffing the odor of melting high-density polyethylene. Concerned, I found a spot on the narrow shoulder to stop, flicked on the hazard lights, and there it was, a five-gallon bucket lodged between the front wheel and the engine, dragged down the interstate by Katie and me.

I got lucky. I kicked the bucket (literally) and continued on my way. The second gas stop in Grand Junction was uneventful. Unfortunately, it was so uneventful that a crucial event didn’t occur at all. 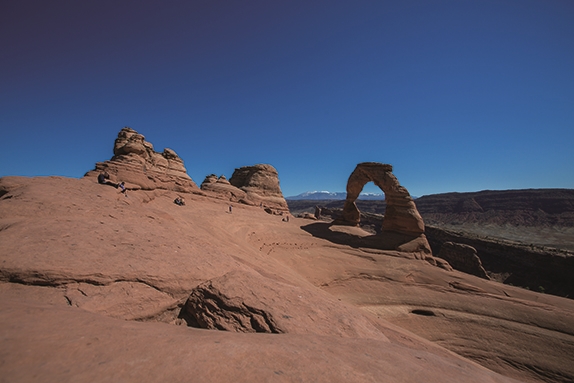 At the I-70 Visitor Center near Thompson Springs, Utah, the wise Visitor Center attendant told me the next gas was at Green River, Utah. No worries, until I pulled into a gas station there to discover that the missing event back in Grand Junction was the one that involved taking my wallet off the gas pump, and replacing it in my pocket. I had no money.

Unlike Jack Riepe, my stories are true. Calling US Bank to inform them of my predicament, I was informed that their nearest branch was back east in Fruita, Colorado. The current time was 4:25 p.m. and the bank was scheduled to close at 5:30 p.m. Fruita is 90 miles away and according to Katie’s trip odometer, I’ve got maybe 90 miles of gas left. The clock vs. miles vs. odometer math just might work, I thought. Well, much to my dismay, an hour later I discovered the math worked out exactly four miles short. 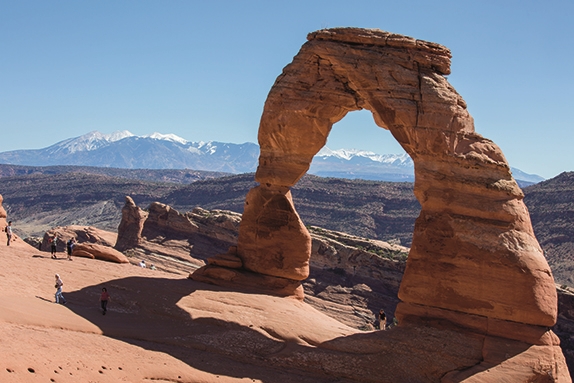 As I ran out of gas, I was able to coast down an exit west of Fruita in front of a wilderness area access gate. Unfortunately, a couple of local guys listed in BMW Owners Anonymous didn’t pick up the phone. Next, I called the Grand Junction Police Department to see if my wallet had been turned in. No dice, but they offered to send a Highway Patrolman out to meet me. Now, I truly love law enforcement, but this young man wasn’t able to fetch me a can of gas or loan me a ten-spot; apparently his role was to protect me from coyotes. He did, however, ask me if I had insurance company roadside assistance. Evidently, his job did include thinking for me.

Roadside assistance (not the MOA’s) agreed to bring a can of petrol. As dusk fell, I politely suggested to the patrolman that he had better things to do, but before he left, I asked where I could pitch a tent. He shrugged and pointed up the hill, past the wilderness access sign that distinctly stated “No Camping.” We had an understanding, probably because it was outside his jurisdiction.

There was one devastating aspect to this roadside assistance. Oddly, the insurance company would cover the charges to get the tow truck out to me, but the driver would need to be paid for the two and a half gallons of gas. Unfortunately, I still had no money and no credit cards. 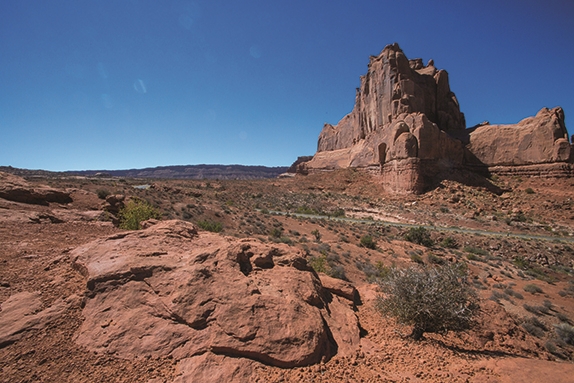 Excruciatingly, this required a telephone call to my wife for a credit card number. An embarrassing explanation inevitably ensued, shattering my hopes of keeping this just between me and my new support team. Getting busted was compensated by spending a warm and pleasant evening camping in the hills overlooking Fruita. This was before I started traveling with a flask of Balvenie 12-Year in my saddlebags; I nonetheless feasted on two granola bars, saving a third for breakfast the next morning, and a warm bottle of Raspberry Snapple.

The next morning went off without a hitch. The US Bank folks in Fruita decided I seemed less a vagrant than I probably looked and smelled, and they spotted me $500. I went west, young man. I had money, I had brains, and I was feeling lucky. It was a wonderful ride to Goblin State Park, Torrey, and Capitol Reef National Park.

At the visitor center in Capitol Reef, the Park Ranger explained the campground was full. No problem, could he recommend any scenic, dispersed camping areas nearby? That’s when we had a moment. He wistfully described an area about 15 miles south, nestled in the shadows of the Henry Mountains. I swear his eyes teared up describing it, so much so that I half expected to see him join my campsite that night. He didn’t, and it was a beautiful area.

The rest of that long weekend trip was perfect. After Capitol Reef, there was Grand Staircase-Escalante, Bryce Canyon National Park, and back to Arches before heading home.

During that ride, I discovered what the attendees of the MOA’s St. Lake City rally know: that even drifting across the I-70 super slab presents some wonderful and picturesque riding.

Epilogue: I am now a proud subscriber to BMW MOA Roadside Assistance. The fine Grand Junction police returned my cashless wallet to me a month later. If you see me and my bike at a Rally, I will vehemently deny having $100 stashed anywhere on Katie or Giselle. I’m smarter than that. 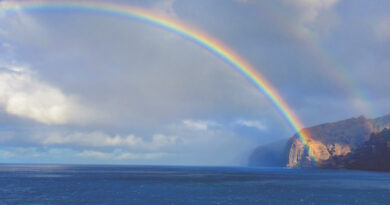 The Mountains of Tenerife 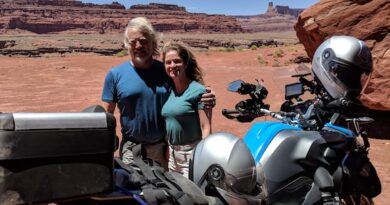 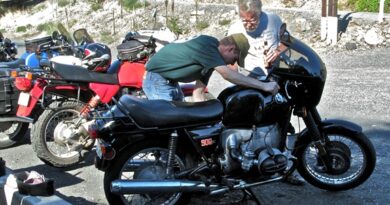