From the street, the modest, single-story home and its two-stall detached garage look like any other in this western Chicago suburb. Step into the garage, though, and you’ll quickly realize this isn’t any ordinary garage. 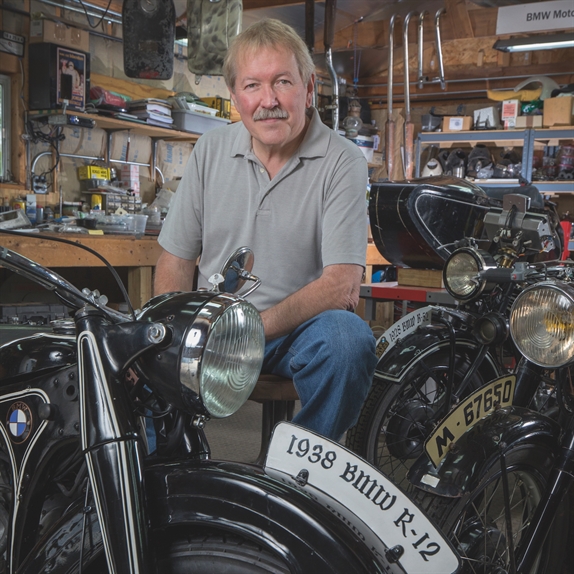 On a long workbench, an empty frame from a 1929 R 11 sits patiently awaiting attention and a new life. From the rafters above, mufflers, fuel tanks, the empty engine cases of an R 12, and other “garage art” dangle, waiting to smack the noggins of the unsuspecting.

“Watch your head,” owner Lee Deyoung warns, “ask me how I know.”

Further back, a sidecar tub from an TR500 Steib sidecar rests on a lift, while in back near the machine shop, four empty engine cases, cleaned and glass-beaded, rest on shelves loaded with wheels, cables and other miscellaneous parts, all waiting for their turn to get back onto the road.

Between the walls of this well-lit, thermostatically-controlled and fortified BMW man cave rest the objects of Deyoung’s attention, his ever-growing collection of vintage BMW motorcycles. This is the workshop of Lee Deyoung, vintage BMW restorer, collector and preserver of the marque. 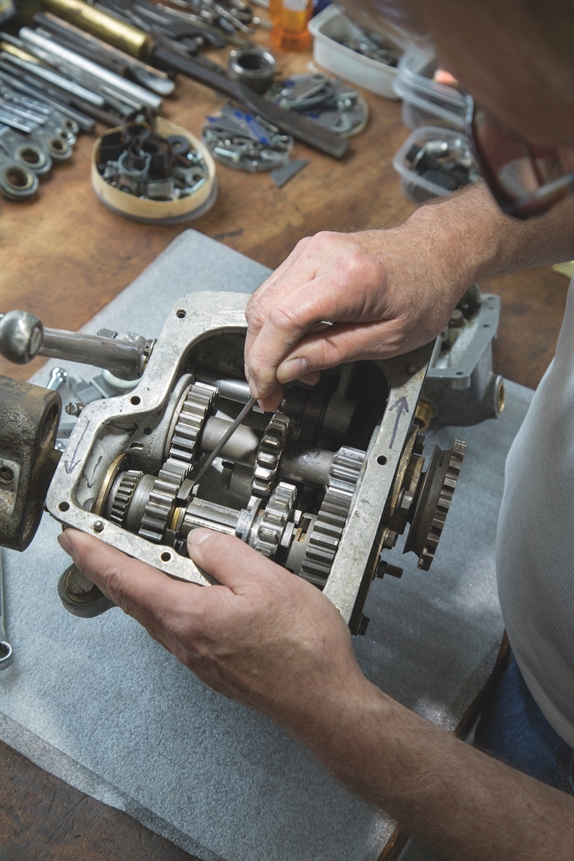 Deyoung’s two-wheeled journey began many years earlier while he was growing up in the bustling suburbs west of Chicago. His old neighborhood buddy was indeed lucky to own a Honda QA 50 minibike, and the boy’s father always made sure every kid who showed up at the 90-acre field got a chance to take a couple laps. Sharing was a hard-learned lesson for the only kid with wheels. It didn’t take many laps on the little Honda before the hook was set for Deyoung.

Soon, Lee and his brother pooled their money and bought a Suzuki 90cc Enduro. That bike was followed by a Yamaha DT 250 that Lee used to race motocross. Then came more Yamahas—street models. First was an XS650 and later, an XS1100 Midnight Special.

Then, in 1983, a friend bought an R 80 ST and no longer needed the “barn find” 1965 R 60/2 sitting in his garage. Though he was only looking for transportation, something unrecognizable sparked in Deyoung’s mind, and he bought it. What Lee found with his first quirky German motorcycle was not only a love for the BMW marque, but a great satisfaction in bringing an old BMW motorcycle back to its original glory.

According to Lee, what typically happens with a motorcycle restorers is that they’ll start with a particular vintage BMW model such as a /5, R 90 S or /2. Once completed, two things could happen. While some will realize that a single vintage BMW is enough for them, others like Lee find that these “clunky and cool” machines are really fun to work on and one is never enough. Lee has been battling his vintage addiction since 1983, and there’s no cure in sight.

A year after buying the R 60/2, Lee purchased another iconic BMW motorcycle, a 1984 R 100 RS, and the floodgates burst open. 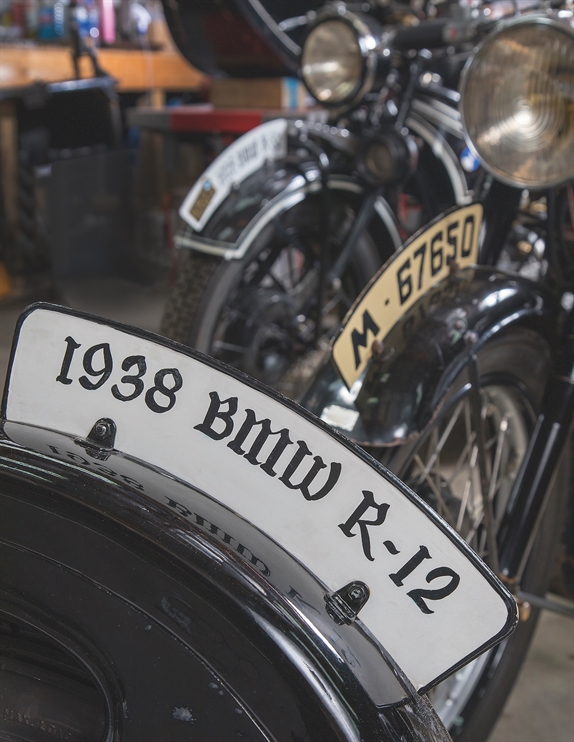 Already owing an R 60/2, Deyoung initially focused his attention on 1955-69 BMWs, the /2 era. His original goal was to own a model built during each year of that decade. As Lee was whittling down his list, he had the opportunity to complete a ground-up restoration on an R 51/3. During the restoration, Lee found the older bikes to be “even quirkier,” and in the days before the internet, parts were even harder to find. Welcoming the challenge of overcoming those obstacles made the restoration of these older bikes even more fun than those from the 60s.

If quirkiness is how Deyoung chooses the BMWs he restores, stepping even further back in time to models built before WWII gives him the rush he desires.

It’s there Deyoung satisfies his thirst for the unusual with so many different models of motorcycles and the differences they all possess, from hand shifting three and four-speed transmissions, to carb placement, suspension changes, and the use of levers to control throttle, choke and ignition. Even the massive guillotine switch used within the headlight shell to move between high and low beam on the headlight intrigues Deyoung.

“Actually, the contacts on the guillotine switches are so big that unless there’s some catastrophic failure, they’ll run forever,” Deyoung marveled. 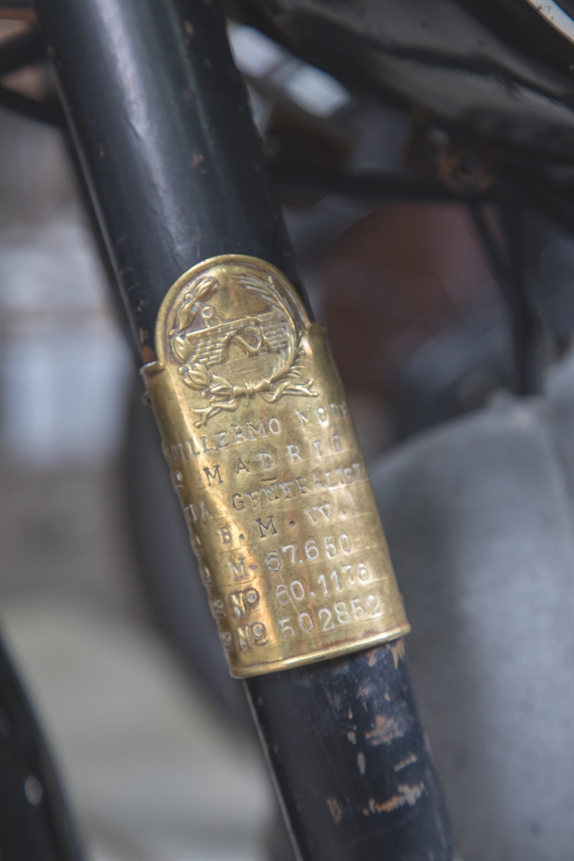 In the early days of BMW’s motorcycle production, changes were being developed very quickly. It’s those changes and the limited production runs of these motorcycles that makes finding replacement parts difficult and challenging, yet so rewarding when successful. For Deyoung, much of what keeps him interested is the “thrill of the chase.”

Deyoung’s current projects include his 1929 R 11 and the 1937 R 6. Found in a Wisconsin barn, the R 11 apparently had a rough life, and extensive work will be needed to restore the motorcycle to its original glory. With a broken transmission and replacement parts impossible to find, Deyoung relied on his background as a machinist to cut new gears in the machine shop at the back of his garage. His extensive experience in repairing sheet metal and frame-building gives him the tools he needs to complete even the most difficult restorations.

Bringing the R 6 to his shop proved to be a much easier, though more time consuming endeavor. BMW’s first 600cc motorcycle, the R 6 was only built for one year and featured cutting-edge technology which included a hydraulic fork with adjustable damping. With a production run of only 1,850, the R 6 is a very desirable, yet difficult prewar model to find. Lee found his R6 on the pages of German eBay and discovered the bike was initially exported to a dealer in Spain. He was even more surprised to discover that it was a single-owner bike that had never undergone restoration. Deyoung’s interest began to peak.

When the auction for the bike ended without meeting the reserve, Lee realized he had purchased other items from the seller and still had his contact information. Eventually, the two worked out a deal, and with a tracking number in hand, Lee followed online as the bike slowly traveled from the seller in Spain before finally arriving at O’Hare International Airport on Thanksgiving Day.

Luckily, not all of the bikes in his collection are as difficult to acquire. Through his reputation within the vintage BMW community, many leads are presented to him. A potential /2 era bike in Alaska currently has Lee thinking of taking a trip north.

Asked to choose his favorite bike, Deyoung struggles to find an answer. 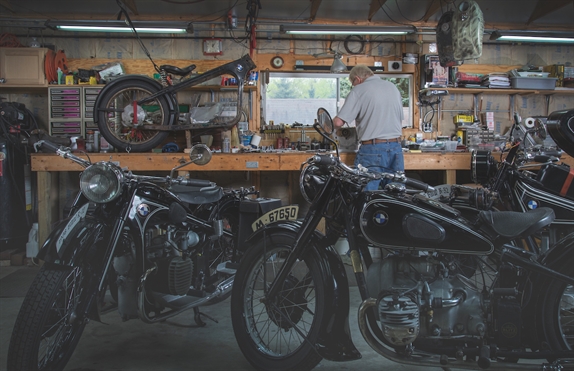 “It used to be my sidecar bike, probably because of the inherent quirkiness of a sidecar,” he said. “Now that I’ve gotten into prewar BMWs with all their odd idiosyncrasies, I see them as clunky, cool 3-D sculptures. It would be like choosing which of your children you love best.”

As Deyoung’s interest in vintage BMWs grew, so did his seemingly unquenchable thirst for knowledge. By watching others work or, as a former employer described, “stealing with his eyes,” Lee soaked up as much as he could by spending time with pillars of the BMW vintage community and the likes of Bob Lonergan, Richard Sheckler, Craig Vechorik and Jack Wells—men whom he now calls friends. Lee is now known as one of a dozen or so across the country with their level of expertise.

According to his friends, Lee has become a talented perfectionist who continually strives to build upon his mastery of BMW history. Without this knowledge, Lee believes, he would be unable to fulfill not only his own high expectations, but the expectations of other BMW owners who trust him to work on their motorcycles.

Sharing his knowledge has become an important part of who Lee is and the responsibility he feels to give back. Since 2014 in St. Paul, Lee has served as co-chair of the Vintage Display at the annual BMW MOA International Rally and has coordinated the display by bringing several bikes from his collection, while working with other vintage BMW aficionados to offer rally-goers a glimpse into the rich history of BMW Motorrad.

In addition to his work with the rally’s Vintage Display, Deyoung shares his knowledge a couple times a month at a Friday night tech night in Geneva, Illinois.

Easing into retirement by working part-time has given Lee more time to pursue his real passion.

Today, it’s the thrill of the chase that gets Lee out of bed each morning. Like clockwork, he’s up at 5:45 a.m., and after pouring his first cup of coffee, he’ll flip on his computer and begin searching the German pages of eBay, looking at what’s been added since his last visit the morning before.

With any luck, new items will pop up on his watch list, and his never-ending treasure hunt for vintage BMW motorcycles goes on. 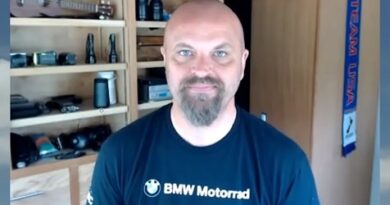 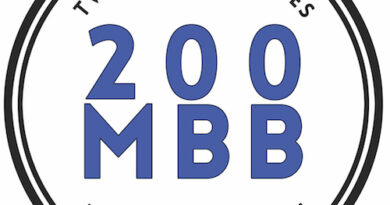