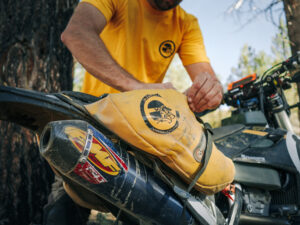 The new rear mounting system deploys the Pronghorn Strap for a firm grip on Giant Loop’s Tail Rack or other solid anchor points behind the seat. Or, on some motorcycles, the two Fender Hooks can be added to the Pronghorn Strap and cinched tight on many plastic dirt bike style fenders with no additional mounts or hardware required. Forward tension from the saddlebags’ two side anchor straps holds the saddlebags tight in rough off-road riding conditions.

Designed for trail riding and aggressive, off-road day trips, the stable, rugged, slim, trim MoJavi Saddlebag secures essential gear, such as inner tubes, tools, fluids, and other save-a-ride necessities without getting in the rider’s way. Carrying gear on the bike, not in a backpack, reduces fatigue and improves endurance, making the MoJavi the preferred choice of motorcycle medics, off-road racers and Baja explorers. Total packable volume is 12 liters (two 6-liter side pockets with water resistant YKK zippers), and the saddlebag weighs just three pounds. USA MSRP is $229.

The Coyote Saddlebag mounts using the same system as the smaller MoJavi Saddlebag, but its 39-liter capacity makes it the choice for overnight or longer rides. A roll-top opening provides quick, easy access to camping gear, clothes and tools, which can be organized inside the saddlebag with the included set of three waterproof, RF-welded Dry Pods with air purge valves. Recently, the Coyote Saddlebag circumnavigated the globe with New Zealander Aaron Steinmann on his KTM 500 EXC. The Coyote weighs just 4.5 lbs. USA MSRP is $399. 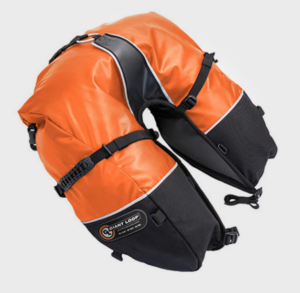 Both the MoJavi and Coyote Saddlebag include a Hot Springs Heat Shield Kit to protect soft luggage from exhaust heat. They feature sewn construction using rugged Bomb Shell™ materials that resist water, mud, snow and dust, and they are backed by a limited lifetime warranty. Color options are black, gray or orange.

The MoJavi Saddlebag and Coyote Saddlebag comprise the core of Giant Loop’s most dirt-focused rackless, modular, customizable motorcycle soft luggage system. In 2008, the company pioneered the rackless motorcycle luggage system with its original and much imitated horseshoe-shaped Giant Loop Saddlebag, and the Coyote Saddlebag is its direct descendent. This ingenious biomorphic design positions gear exactly where motorcycles are engineered to carry weight — tight to the motorcycle with “legs” that keep heavy gear below seat height — minimizing the performance impact of packing gear on a motorcycle.

Giant Loop adventure proof packing and gear systems are available at giantloopmoto.com, Tucker, WPS, Parts Canada, a network of dealers throughout the USA and flagship importers around the world. Giant Loop designs and tests products in Bend, Oregon. 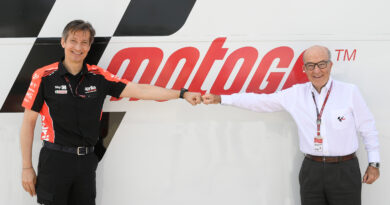 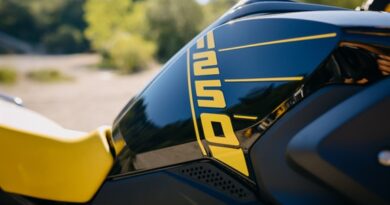 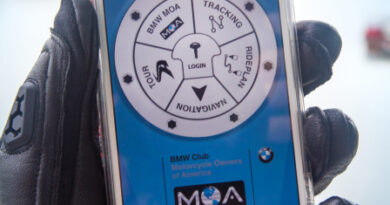