It all began innocently, without any premeditation. I found myself trailing my older brother as we swayed from curve to curve along M119 in northern Michigan, he riding a Yamaha 250 while I straddled a Kymco 250 scooter. Some 20 miles of bliss later, I began to think I wanted a motorcycle. Just a week later I was following my GPS while navigating by car from Knoxville, Tennessee, to Clemson, South Carolina, with my wife. Out of nowhere we found ourselves being photographed while rounding another hairpin corner on some U.S. highway numbered 129. When I finally realized where we had been and the nature of the special road we had just travelled (the Tail of the Dragon), I quickly took notice of the various bikes and riders pulled over at the restaurant and gift shop located at the foot of the 11-mile ride. I’ll never forget the exact moment that I saw three BMWs parked together, outfitted with mud-splashed luggage and miscellaneous farkles, because that was when I decided I wanted a motorcycle and it would be a BMW. 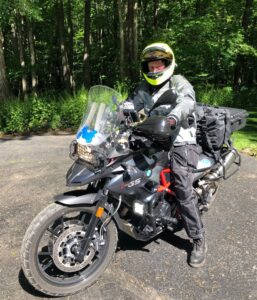 At 57 years old, I had never even dreamed of riding a motorcycle. When I was 12, my Dad bought an Indian 50 or 75 cc bike for my older brothers to ride, but when one of them crashed it just one hour later, skinning himself up nicely in the process, the notion we would have any motorcycles in our family garage was put to rest. Like most kids back then, I had some limited exposure to the occasional test ride of a friend’s bike, and was certainly experienced at the nuances of a clutch and gears from the cars we learned to drive, but the thought of owning a street legal, full-sized motorcycle never entered my mind.

Upon returning from our trip, I immediately began to scour articles and information about motorcycles, the various types and virtues of each. I knew right away the bike I would inevitably choose was to be an adventure style, capable of light off-road riding, and comfortable enough to spend time on while hitting the roads. After a few weeks of weighing my options and self-appraisal of my skills (or lack of), and goals, I sought out and found a slightly used BMW F 700 GS only five miles from my house! I bought it the next day, having yet to even take the introductory road skills class at the local high school. The class was the following weekend, and once I completed it, I was determined to learn how to ride safely, without taking unnecessary risks. That was over a year ago.

Since it was late July, I had lots of opportunities to ride the bike and to learn how to do so in a controlled environment. I stayed on streets with slower speed limits, less traffic and few stop lights until I felt comfortable and confident to take on higher speeds and more traffic. I took the process seriously, step by step, kind of learning to crawl, walk, trot, then run. I rode the bike as much as I could, slowly but surely learning the various nuances of riding with awareness and purpose. Having ridden mountain bikes for several years, and also by virtue of the F 700’s low center of gravity, I felt the bike was super easy to navigate and control. It was so easy to ride and learn on, I wonder to this day if there could be any easier bike for beginners. 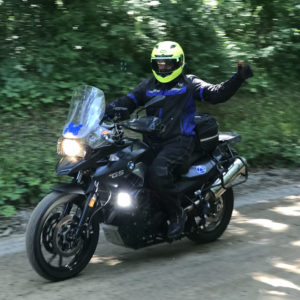 As the winter months swallowed Michigan and the surrounding states, I put the bike on a trickle charger and prepared for the occasional thaw by upgrading to some new tires and a heated vest. Sure enough, I was able to comfortably ride for at least a few days each month through the winter, and continued to ramp up my seat time as the COVID virus mandated social distancing. I found a gently used Russell Day-Long seat (a game changer) and a GIVI windscreen that seems to work just right for me. I ride with protective gear all of the time, and I am now hoping to venture out with the goal of meeting like-minded riders at rallies and other get-togethers once we can reengage as a society again.

I joined the MOA and my local Chartered Club here in metro Detroit. Recently I was finally comfortable enough to join a group ride with some 25 other (mostly) BMW owners on an 85-mile ride over dirt roads in southeast Michigan. I kept up just fine as I had been practicing on dirt and gravel roads for a couple months, and met a couple cool guys in the process.

During my year of discovery I found a new love and a new zest for living that just thrills me each and every day—even those when I don’t ride, but only dream of riding. I have logged about 13,000 miles now, I can envision someday adding my name to the 100,000-mile club. I read with great envy the stories of those MOA members who have ridden for years and years, and I certainly wish I would have discovered this great passion way back when. I don’t hold regrets, and you can bet I will now be taking full advantage of every opportunity I get to ride and explore this great country one mile at a time.

See you all on the road, I’ll be the guy wearing the big grin! 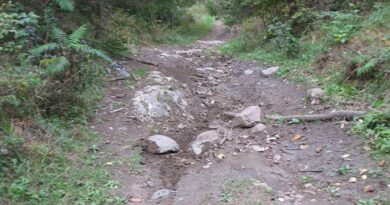 The prize of survival 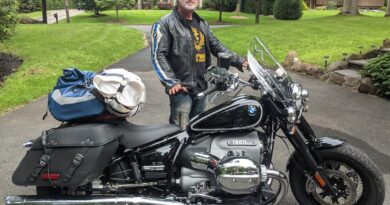 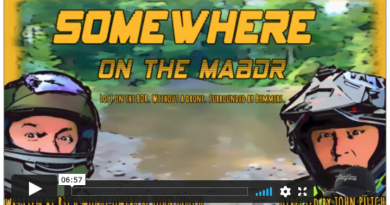