The BMW Motorcycle Owners of Alabama (BMW MOAL) was the MOA’s fifth chartered BMW club.  We just celebrated our 50th birthday at the Lake Guntersville State Park nine miles north of Guntersville, AL. Organized in October of 1971 with 10 members (five original couples), many changes have occurred over the decades.  The club decided at July’s Business Meeting (at the Harrelson’s lake house) that we should celebrate 50 years in a big way.  We had a team of people go through all of our old club directories to compile a comprehensive list of current and former MOAL members who would want to be informed of our anniversary bash.  Nearly seventy people RSVP’d to attend the anniversary party and gala dinner.

We also had special “50 Years” tee shirts created for the occasion; 65 members/friends purchased the anniversary shirts.  Vance Harrelson, Jeanne Zibell and Phil Ager joined forces to ensure the shirts were designed and printed in time for the event – no easy feat with today’s supply chain difficulties.  Jeanne made a special trip to Homewood, Alabama, to get the shirts to the lodge in time for the party.

The regular club business meeting at Lake Guntersville Lodge became the backdrop for the weekend “reunion.” The weather was beautiful as some folks arrived Friday night at the third-floor hospitality suite.  The celebrating commenced with a view of the lake, snacks, beverages and friendly reunions.  We were treated to a glorious sunset on Friday, especially when compared to the last pre-covid lodge meeting in 2019 which was extraordinarily rainy.  That added to the special effects for the birthday weekend.

About a dozen of us had a relaxed dinner in the lodge dining room and then retired early to prepare for the formal festivities to come.

The gathering started at 1PM Saturday in the hospitality suite.  As usual, we started earlier than that preparing snack foods and swapping stories. Folks filtered in and out, eating, visiting and generally having a good time meeting and greeting old & new friends.

John & Jeanne Zibell, Pam & Tom Werstler, and Ray Zimmerman, past Executive Director and CEO of the MOA, all put in a significant amount of time before the weekend, selecting old photographs of club activities and creating laptop slide shows.  This became one of the highlights as people fondly recalled names, faces and events from the club’s history.

Five of the earliest MOAL members attended the gathering: John Harper, Cecil Freeman, John Swafford, Grant Borden along with Ray Zimmerman.  In the middle of the afternoon, we turned the spotlight on the founders to tell the story of the club’s inception and its early days.  According to their recollections, five BMW owners from Anniston, AL met to discuss forming an Alabama club.  They’d discovered that other early BMW clubs were having discussions about forming a national BMW motorcycle club: The BMW Touring Club of Detroit (#1), BMW Riders of Western NY (#2), Chicago Region BMW Owners Assn (#3), and The BMW Owners Club of San Diego (#4).  John Harper took it upon himself to ride his new ’71 R75/5 to southern California in August of 1971 to meet with Bill Harmer, the president of the San Diego BMW club.  John had attended the Four Winds BMW Rally near Pittsburgh, and was determined to organize a BMW club in Alabama.  John took it upon himself to plan a trip out west with a stopover in California along with two local buddies.  They took a 800 mile detour south into Mexico during their ride west.  [John later remarked to the author that it turned out to be one of those extraordinarily scary  excursions where the group was threatened overnight by the locals and then further down the road were robbed by the Mexican Federales about 100 miles from the Texas border.  He was greatly relieved to have safely returned to the US – after having his borrowed sleeping bag robbed with two guns pointed at him.]  He then rode west to Southern California alone while his friends headed east back to AL.

It was during his visit that he learned that an organizational rule required all “chartered” clubs to have at least ten members.  Since there were only five riders from Anniston in the initial discussion, they decided to assign their wives member numbers to bring them up to the minimum of ten BMW riders.  The founding ten members paid their nominal membership dues to become the Alabama contingent of the “BMW Motorcycle Owners of America” and earned their single digit BMW club number #5.  Word got out across the state and at their second meeting, Russ and Marty Simpson, owners of the Huntsville BMW M/C dealership, brought an additional 15 BMW enthusiasts to greatly expand the membership rolls of the BMW MOAL.

Our early founders reminisced for about an hour, with commentaries from the audience, before they had to head home along the curvy byways around Lake Guntersville.  The casual story-telling continued on before the remaining celebrants headed over to the restaurant for dinner in the central Lodge.

We had a separate dining room in the back of the Lodge’s restaurant for our anniversary BBQ buffet sponsored by the club.  There was plenty of food and conversation to extend the evening. Some folks needed to scoot home for pet maintenance and other reasons {Susan Galpin was very pleased to leave with two large boxes of rib bones}.  The usual suspects returned to the hospitality room for a night cap (BYOB) and to cheer on Alabama football on prime-time TV.  Roll Tide!  Auburn took the week off…

With goodbyes exchanged, it was time to head home on Sunday morning, and to start thinking about our next club gathering, always scheduled for mid-December before our families gather for Christmas.

Jeanne and John Zibell deserve special recognition for the tremendous effort they put forth in orchestrating the entire weekend of fun and food.  Additionally, we added three new members to our rolls on Saturday.  As a result of their hard work, there were smiles all around reliving the early days of the club and the many people and club activities over the intervening years.  It’s amazing that these people have enriched our lives because our enthusiasm for BMW motorcycles and their unique engineering history. 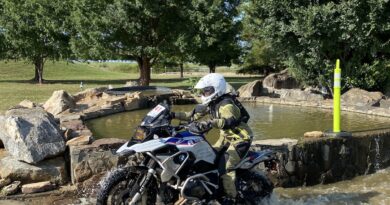 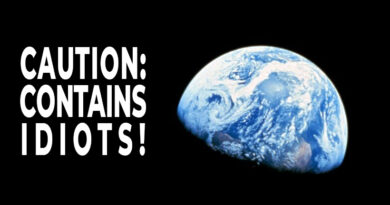 Idiots! (and how to spot them)