I’ll spare you some of the gushing praise I gave Pit Bull in my recent review of their One-Arm Rear Stand; suffice it to say their engineering and craftsmanship are second to none. Part of the reason I wanted that stand for my 2013 F 800 GT was to facilitate the use of a front stand. Whereas there’s no problem lifting a bike’s swingarm by itself, front stands should almost always be employed only in conjunction with a rear stand. This is due to several factors: a) the inherent instability of forks pivoting around the steering head, b) the way rake offsets under-fork support away from the chassis at a potentially precarious angle, and c) the meager purchase provided by the front end’s mainly vertical surfaces. Incorporating a rear stand immobilizes the bike along its longitudinal axis, restores chassis pitch balance, and holds the whole machine upright more resolutely in the presence of lateral pressure. A center stand, while adequate for hoisting the rear end during routine maintenance, does not provide the same level of stability as a rear stand, and is very awkward to use for getting the front off the ground (e.g., by strapping the bike’s tail down). If you want to safely pull your front wheel or forks off the bike, you’ll typically need both a front and rear stand, with the latter securely in place first.

There are two types of front stands: those that lift from underneath the fork leg tips (“forklifts”), and those that lift from the steering head (“head lifts”). Lifting from beneath the fork legs is simpler and sufficient for front wheel removal, but forks obviously can’t be removed while still part of the load-bearing equation. Fork removal requires propping up the chassis elsewhere, and a head lift is usually more convenient than using jack stands and more stable than a floor jack. A head lift will also allow removal of the front wheel by itself, but might get in the way of fasteners and necessitate some disassembly of parts near the steering head to allow it access. Ideally, then, the well-equipped garage would have both types of front stand. 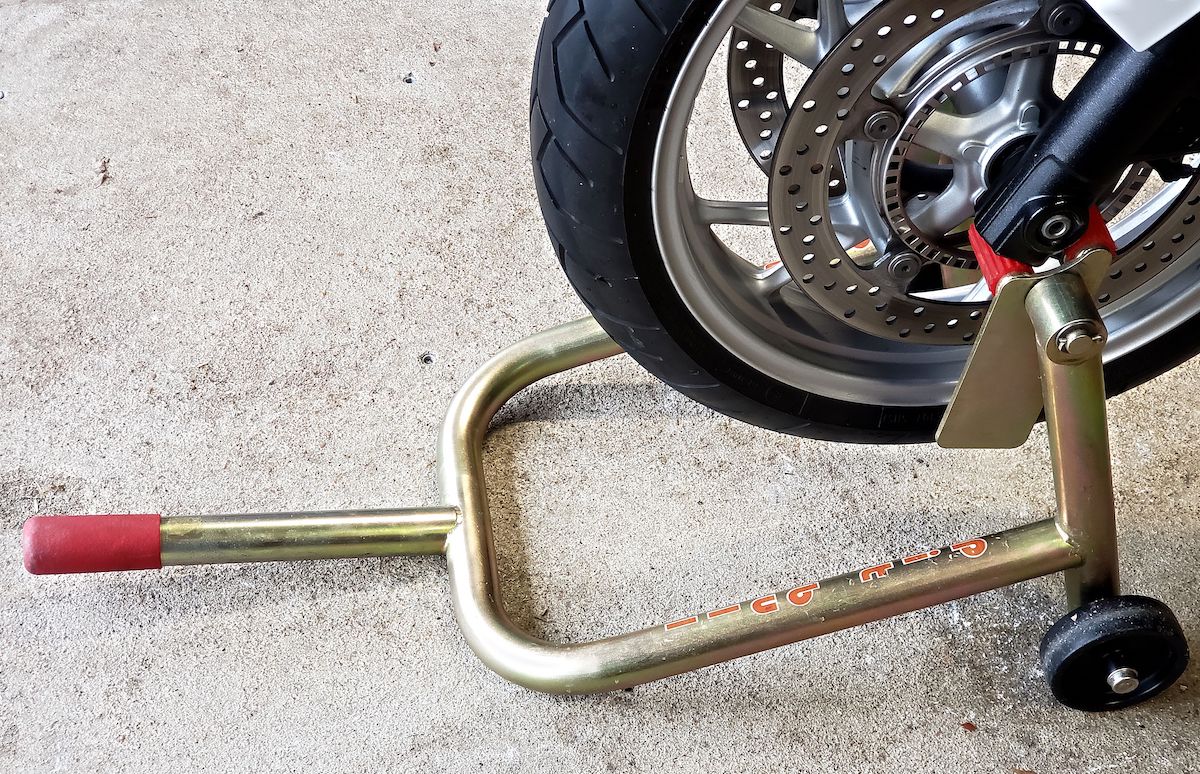 Pit Bull’s modular Hybrid Dual-Lift Front Stand ($229.95) is actually two stands in one. Its base is a forklift, and an attachment converts it for head lift duty. Those unsure they really need both can purchase the individual components several ways. The Hybrid Forklift Stand ($169.95) will only lift from beneath the fork legs, while the Hybrid Headlift Stand ($189.95) only works at the steering head. By purchasing the Hybrid Converter (head lift) attachment ($79.95) or the Forklift swivels ($39.95), these single-purpose stands can be made capable of both functions. Note pre-2012 forklifts require a nominally different head lift attachment, called the Forklift Converter ($89.95). Also note some ABS-equipped bikes and certain (Telelever) BMWs and Ducatis need stand components with slightly altered dimensions, though the basic stands work with the vast majority of modern motorcycles. Check Pit Bull’s website for special fitment considerations and optional pieces to best suit your specific machine, and don’t hesitate to ask their knowledgeable staff if you’re at all unsure. $20 flat-rate shipping is available from the Huntsville shop on orders over $150, and Pit Bull products carry a lifetime 100% satisfaction guarantee.

Long ago, when I bought my Hybrid Dual-Lift, it did not feature seven steps of height adjustment, as does the current offering. Nor could it be ordered with a removable or extended handle, which now allow easier storage and greater leverage, respectively. According to Pit Bull, utilizing the lowest height adjustment on the new stand can make it possible on some bikes to get by with just a center stand and avoid purchasing a rear stand, as the front would not rise enough to unweight the center stand. Aside from this adjustability and the details of attaching the head lift section to the forklift base, the design and operation of my old Dual-Lift is the same as the new model. I couldn’t justify replacing my perfectly functional legacy version, although I can easily appreciate the advantage of having height adjustability and the option of a longer handle for use with heavier motorcycles. 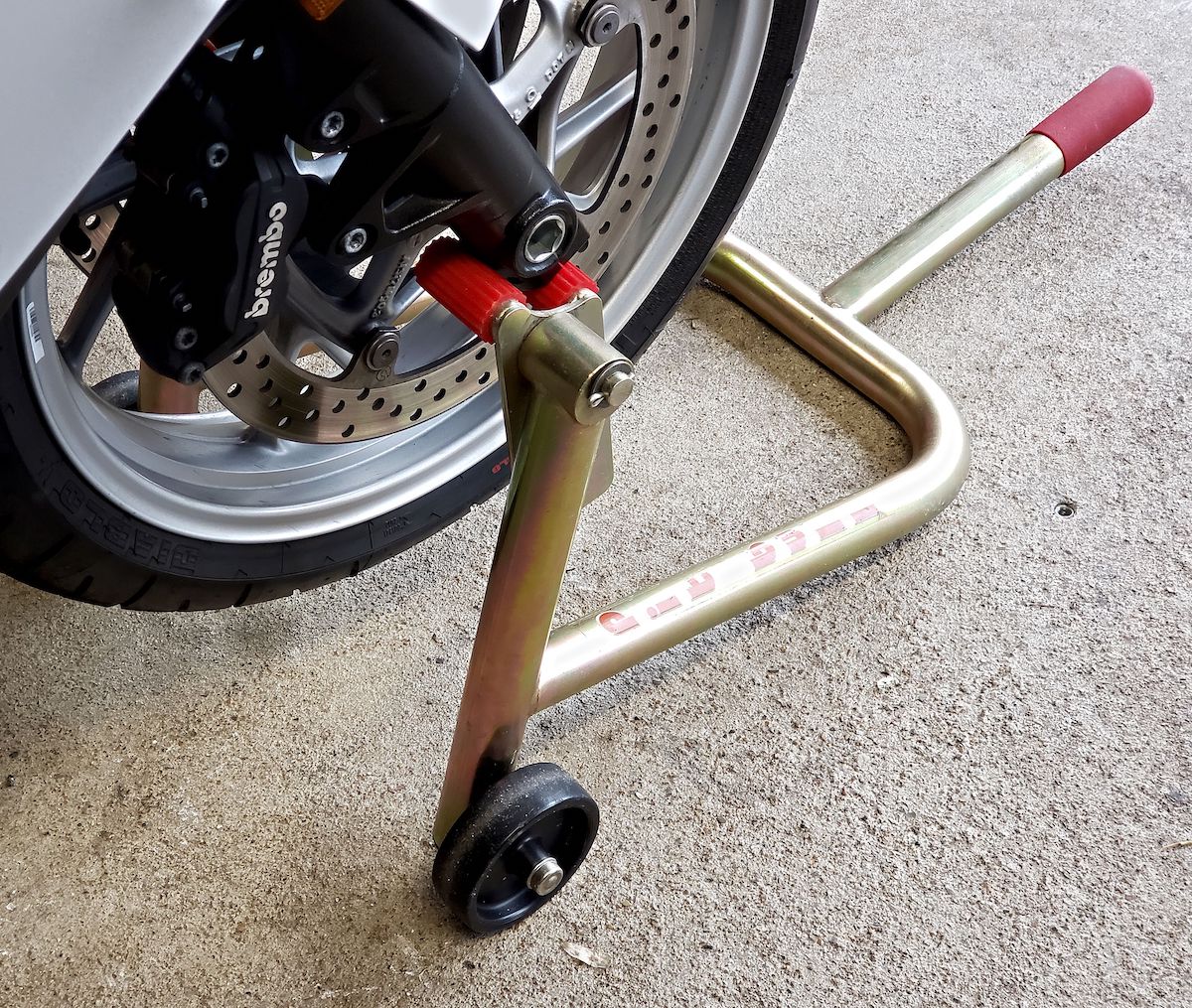 Both sections of the Hybrid Dual-Lift Stand are constructed of Pit Bull’s standard 1-1/2” zinc-plated steel tubing. As evident in the photos, this protective coating works; the main sign of aging on my old stand is the slightly faded and chipped decals. Despite years of storage in intermittently damp environments and trips to the racetrack in nasty weather, hints of corrosion are sparse and faint. If I’d shown the new model, you wouldn’t see how well these stands hold up to decades of hard use. Their long-term durability and adaptability make them worth their initial cost. The heavy-duty wheels are 4” in diameter and deliver smooth, steady movement as the stand is levered into position.

In forklift mode, each upright of the base utilizes a pair of swiveling, counterweighted, rubber-sleeved pegs to cradle a fork leg; these rotate in high quality ball bearings to maintain consistent contact as the stand arcs into and out of its supporting role. The action is fluid and easy, and the motorcycle, thus elevated, feels rock-solid (with rear stand in place). Ready access to fender-, axle-, and brake-related hardware is preserved in virtually all cases. 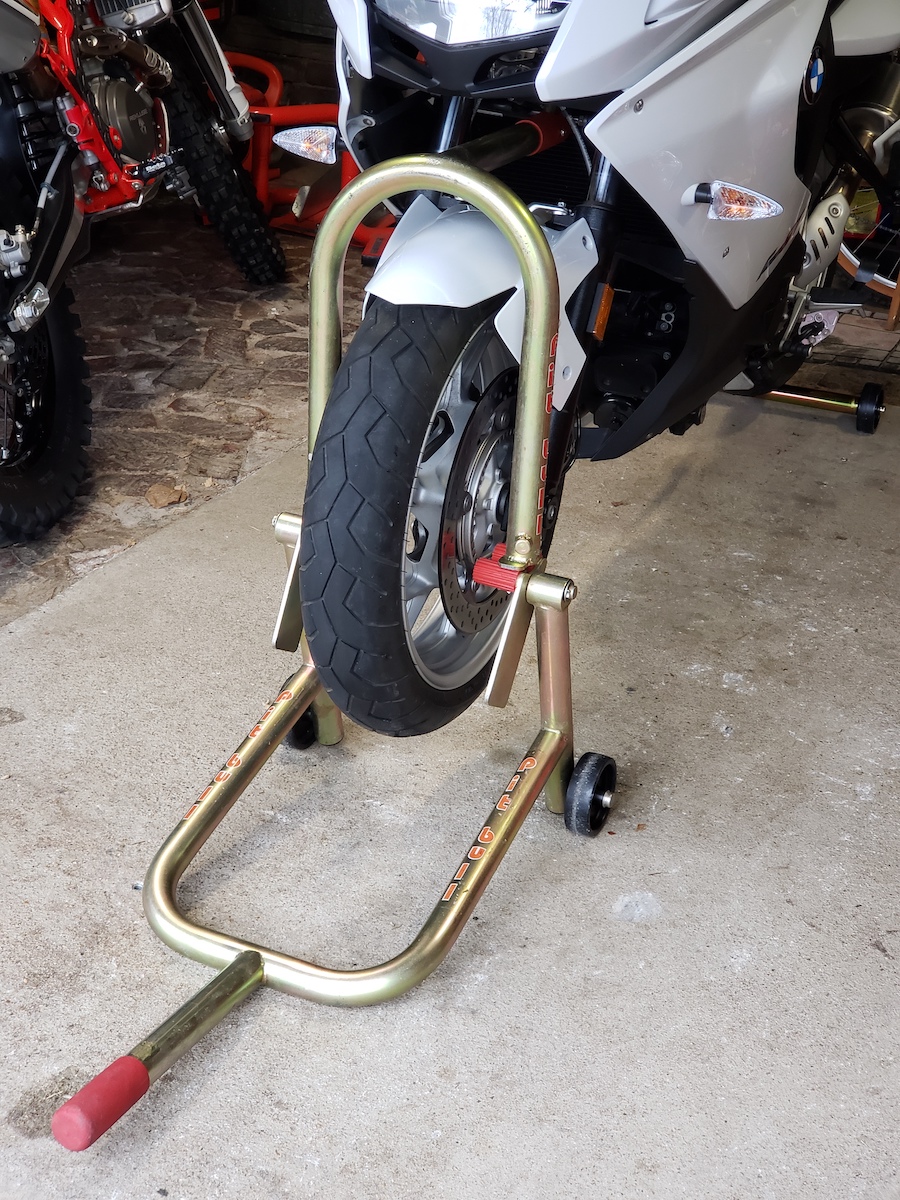 Attaching a head lift to an older forklift involves securing stubs on the head lift’s bottom to the forklift’s swiveling fork cradles using large cotter pins, a quick and simple operation (these cotter pins store conveniently in a lug on the head lift – typical Pit Bull touch). On the new versions, the head lift attaches outboard of the fork cradles on their pivots with a retaining pin on each side. This arrangement leaves a little more workspace open between the head lift uprights and the forks, as those uprights are now slightly further apart. Once the forklift and head lift attachment are connected, a pin atop the head lift’s central arm is inserted into the steering head’s lower orifice and the articulated stand is levered into place much the same as it was in forklift mode. Only now the fork cradles end up behind or ahead of the fork legs and the bike’s weight is suspended at the frame. Because steering stem orifices vary widely in size, Pit Bull offers head lift pins in numerous diameters to fit most any bike. One pin is included in the head lift’s price, and alternates can be purchased separately ($14.95-25.95 for most) and swapped out via a retaining screw.

On my F 800 GT, a small brake line junction box is mounted just forward of the steering stem, with fittings extending back across the lower orifice. To use the head lift, a single mounting screw must be removed, allowing the brake hardware to be pulled aside during pin insertion – slightly awkward, but no big deal. As is typically the case, this bike’s fairing does not foul the stand in head lift mode, but some fairings may have to be partially removed to provide adequate clearance. If a head lift is being used, it’s probably because the forks are coming off, which may require fairing removal, anyway. 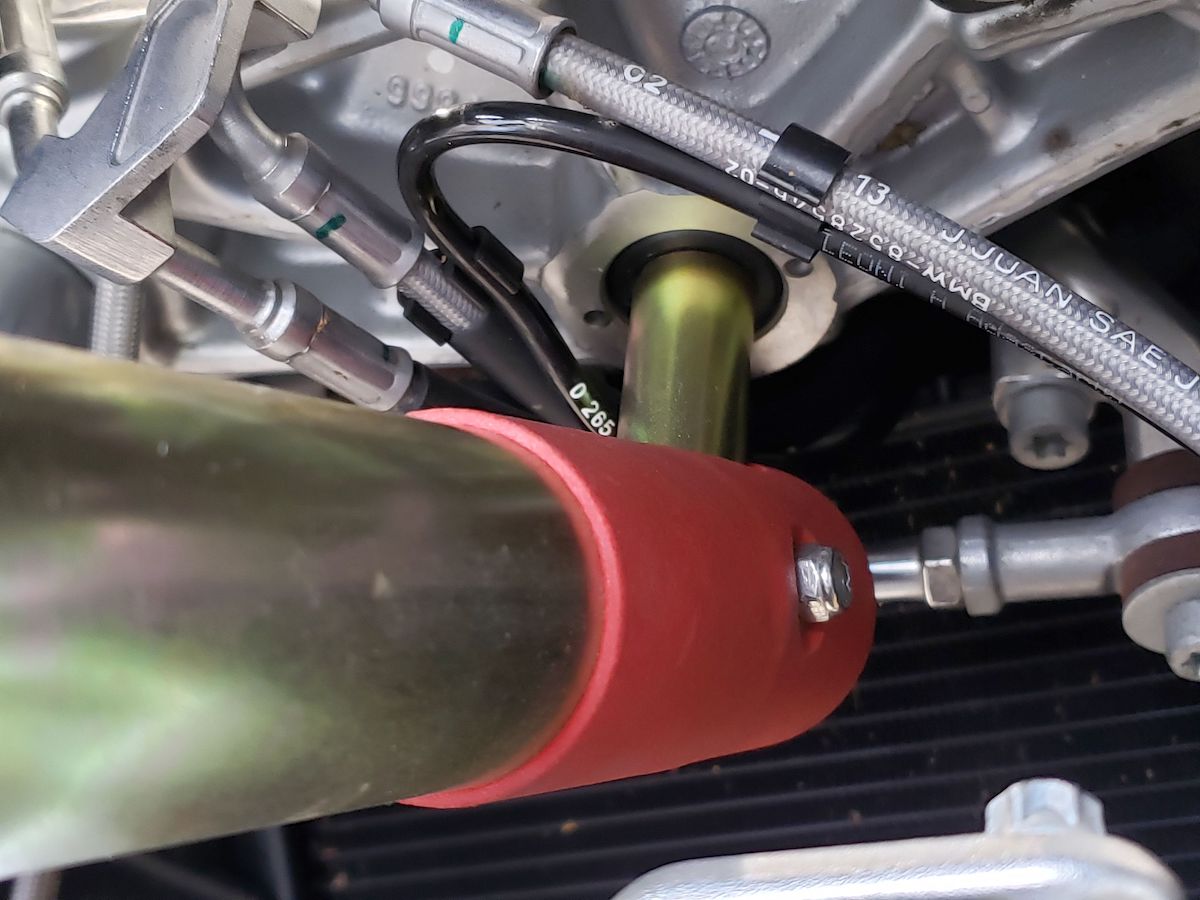 In keeping with Pit Bull’s ongoing efforts to make its stands ever more functional, accessories are available for use with the current models, including small attachments for holding brake calipers and bolts ($17.95/pair) or axles and their retaining hardware ($11.95). Having done without such luxuries (they don’t fit older stands), I often wished for something like them. Still, it’s not enough to warrant the cost of updating my whole rig. I did, however, invest in the stand’s wall hanger ($24.95) to reduce garage floor clutter. 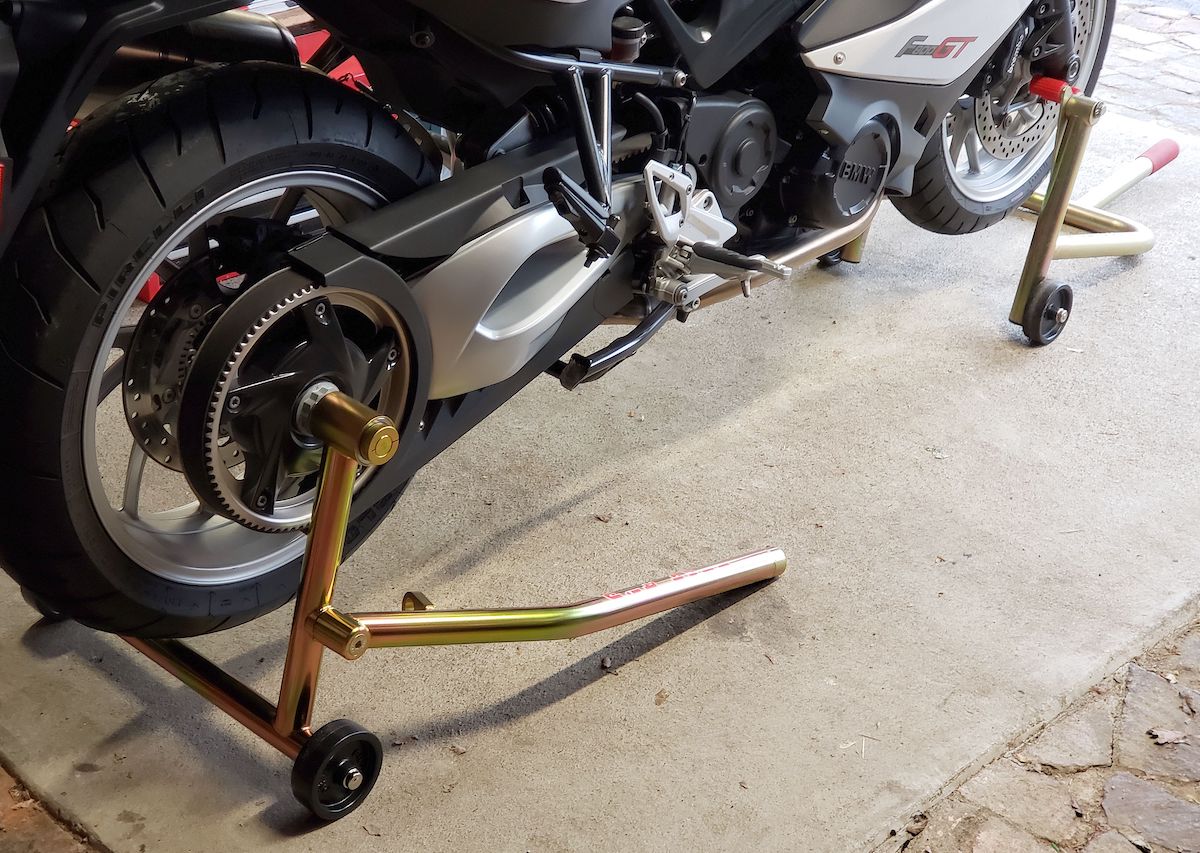 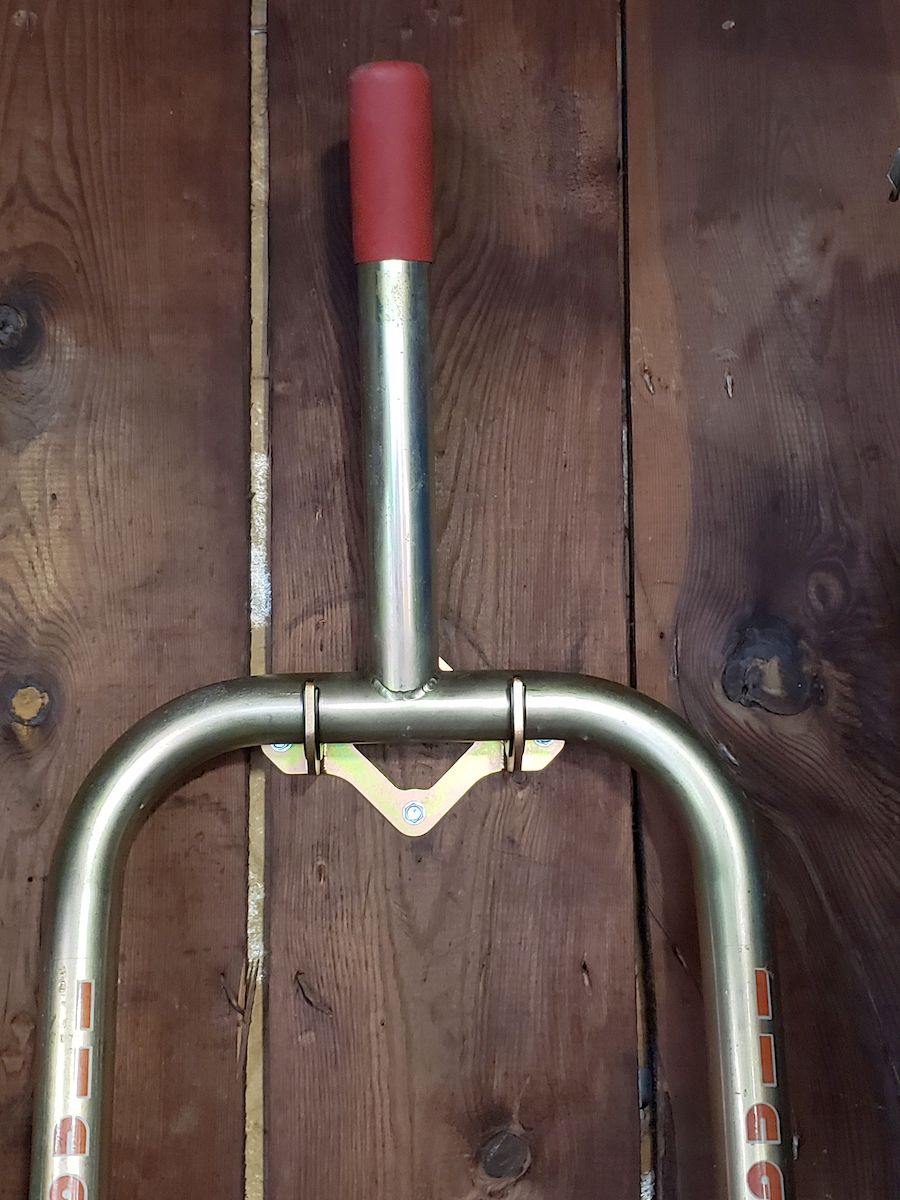 Mark Barnes is a long-time motojournalist and even longer-time enthusiast, both in the saddle and in the garage. His book, Why We Ride, explores all there is to love about motorcycling. Get your copy at https://www.amazon.com/Why-Ride-Psychologist-Motorcyclists-Relationship/dp/1620082284/. 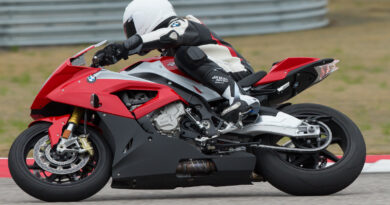 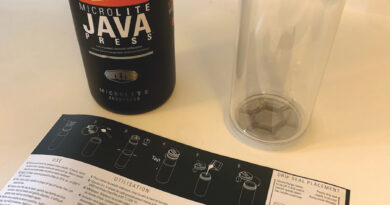 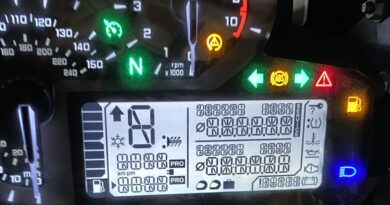