With no disrespect for those whose religious traditions hold this phrase in special esteem, I can’t think of a more apt metaphor for my ride to this year’s national rally in the midst of a record-breaking heatwave. Of course, one person’s lake of brimstone is another’s Caribbean lagoon, so I don’t expect the hardcore among us to be impressed by my suffering or stamina. It’s all relative, and I know countless rallygoers shrugged off higher temperatures over longer distances than the meager versions I endured, with many of you camping throughout the damned inferno! Nevertheless, the 640 miles between my home in Knoxville, Tenn., and my hotel in Springfield, Missouri—most of which were covered in triple-digit heat—represented a unique accomplishment in my personal riding CV. In keeping with the rally’s catchphrase, I “wandered farther” than I have in quite some time 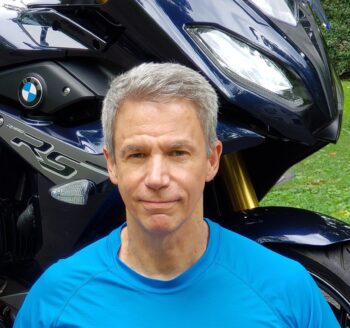 As I’ve mentioned here before, the main reason I bought my first BMW several years ago (after nearly five decades on other marques) was my growing interest in motorcycle travel. While I’d gone on the occasional week-long tour—usually in fabulous weather—during prior eras, my focus was always the relentlessly twisty trails and asphalt readily available to me in my own backyard: the Appalachian mountains and their foothills. I thoroughly enjoyed the Pacific Coast Highway when supplied with a bike there, but I wasn’t about to ride across the country to reach it. I had neither an appropriate machine nor the requisite motivation. Now in my early 60s, I simply have less need/tolerance for the physical threats and abuse involved in carving canyons and hurtling through rock gardens. These days, much of what I used to find exhilarating feels like a lot more stress than it’s worth. I’ve thoroughly enjoyed weekend getaways and all-day rides on my Beemers and have barely touched the other bikes in my garage since the roundel’s arrival. Long(er)-distance riding, while obviously replete with its own dangers and challenges, appeals to me as a new frontier with a better balance of risk and reward.

Listen to this column as Episode 20 of The Ride Inside with Mark Barnes. Submit your questions to Mark for the podcast by emailing podcast@bmwmoa.org.

I definitely would not have endorsed that last statement at the end of the ten hours it took me to reach my first night’s lodging, a mere 452 miles into my route. Despite maintaining supra-legal speeds while moving, I had to stop often to cool down, regain some mental clarity, and rehydrate, in addition to the expectable pauses for fuel and “dehydrating.” Having twice suffered the blinding agony of kidney stones due to carelessness about my fluid intake, I’ve learned to drink water constantly enough every day to require frequent off-loading of the excess. I made sure to stay ahead of the drain produced by my sweat glands on this trip, but doing so added to the number of stops required. Sorry if that’s TMI; I just want folks to understand how I ended up in the blast furnace for ten hours without more mileage to show for it. Not only were the heat and humidity brutal, but I rode through them on one of the flattest, straightest, most boringly featureless roads I’ve ever encountered. U.S. Highway 60 between the Mississippi River and Poplar Bluff, Missouri, rivals pavement in the desert southwest on the tedium scale, and did nothing to pique my interest in one day traversing the Great Plains. A more curvaceous path might exist, but it would have only increased the time spent overheated—not a trade I wanted to make. I didn’t even have a companion to commiserate with and had to stew in my own juices alone. [Queue melodramatic violins.] By the end of Day One, I was seriously reconsidering this whole two-wheeled travel thing.

At least my bike and I weren’t literally engulfed in flames—though we nearly were. At my very first fuel stop, before anything even mildly unpleasant encroached upon my excitement, I had an old nightmare come true. I worked at a gas station as a teenager, back before self-service, and I occasionally had a pump handle get stuck in the full-blast position, resulting in fuel spewing all over a customer’s car, my own body and the surrounding area during the seemingly endless seconds required to free the lever or shut off the pump. Whenever I fill my tank (especially on a bike), I can’t help but recall the potential for such a mishap, and I reflexively check for proper handle operation before the tank is full. As you’ve no doubt already guessed, I failed to do so in this instance, and was duly punished with a geyser of gasoline that bathed my tank, seat, tank bag, and hot engine bay in flammable liquid as I struggled to stem the flow. I keep my phone in my tank bag, charged via an unswitched, always-live accessory cable with its plug conveniently located between my tank and steering head—a now bare plug with its electrified contacts exposed while my disconnected tank bag was perched atop my saddle. In my panicked imagination, said plug could have easily ignited the fuel gushing around it, although maybe such things really only happen in movies. Fortunately, there was a bucket of soapy water nearby, and I could rinse everything immediately afterward, with no actual harm done. In retrospect, this event foreshadowed the miserable blaze in which I would soon be immersed.

Day Two felt less traumatizing, as it was only half as long and didn’t extend into the hottest part of the afternoon. The road between Poplar Bluff and Springfield was also much more motorcycle-worthy, eventually featuring some steep hills and huge sweepers as I left the excruciatingly level farmland behind. Still, more recovery from the heat was required upon reaching my destination, and I had little energy for the rest of that day. I don’t believe I suffered genuine heat exhaustion during my trek, but the sustained high temperatures took an unquestionable toll on my body and mind. I didn’t feel normal physically until the following day, and I had definitely lost some cognitive sharpness during each stretch of riding, especially when the landscape was monotonous. 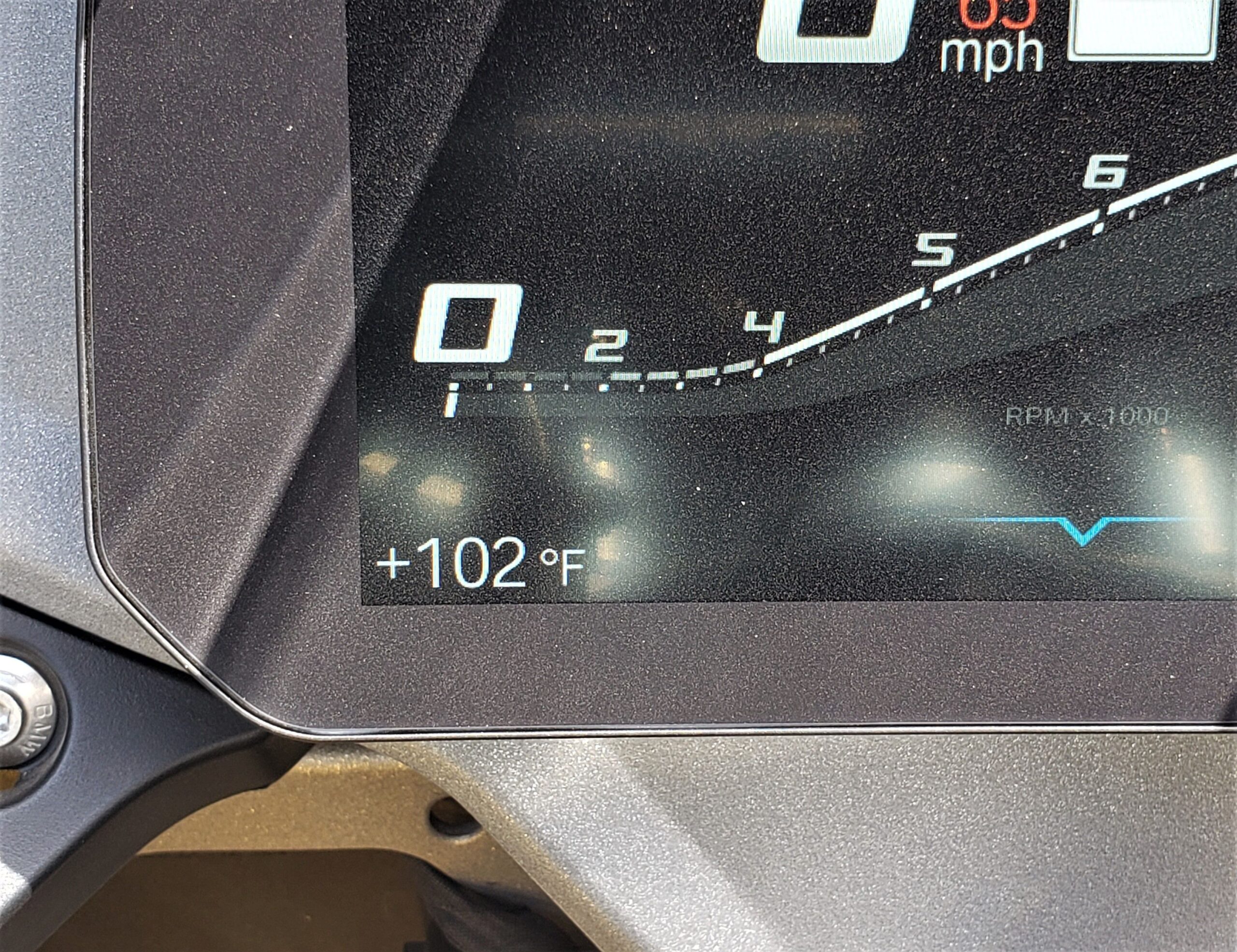 As a resident of the southeast, I’m no stranger to sweltering heat and humidity, and I’d thought I was reasonably well prepared. I’d deliberately ridden on hot days to acclimate, though temps around 100 don’t typically show up here until July and August; I was blindsided by their sudden appearance in mid-June. Heading to the rally, I’d kept sports drinks handy and wore my best mesh gear over a frequently doused synthetic shirt, a combination which has served me well on local day trips. However, I can’t remember ever voluntarily launching myself into 102 degrees, and the nearby mountains always provide some refuge at altitude. The fact I’m not used to covering so many miles in quick succession converged with the extraordinary heat to prove I’d overestimated my readiness. Hence, my intense curiosity about heat-managing gear on offer from rally vendors.

After attending a seminar on hot-weather riding, I picked up a long-sleeved LDComfort shirt to go with their shorts (which I’d already purchased for the trip there), along with a cooling neck wrap and pair of even more extensively ventilated gloves from Klim. I might rave about these in future reviews, but at this point I haven’t tested them in demanding enough conditions to really speak to their effectiveness. You see, my ride home was as sublime as my ride out was hellish. I just happened to catch the brief reprieve between heat waves that coincided with the rally’s end and rode back through delightfully dry air that stayed within a seasonably appropriate 65-85 degrees. Compared to almost 20 notches hotter, 85 felt positively brisk! Even crossing those interminable fields on US 60 wasn’t so bad without the volcanic atmosphere. Surely the new gear made some contribution to my comfort, but I’d have been perfectly fine in my standard summer riding attire.

Nietzsche asserted that which does not kill us makes us stronger; I can think of exceptions to this principle, but he had a point. Covering the miles and surviving the intemperate conditions of my rally trip has had the net result of increasing my enthusiasm and decreasing my reservations about motorcycle travel, even though this wasn’t the case that first night. I’m actually looking forward to getting out on the most wicked days this summer might bring, expecting my new kit to extend the temperature range in which I can ride comfortably. My sense of scale regarding distance has been significantly recalibrated, too. Once again, my horizons have expanded. Such changes have occurred in other dimensions of motorcycling as I worked my way through their challenges, so a similar experience in this domain isn’t shocking, but one of the nicest things about the phenomenon is how wonderfully fresh it feels each time it happens.

I’m beginning to see the light… 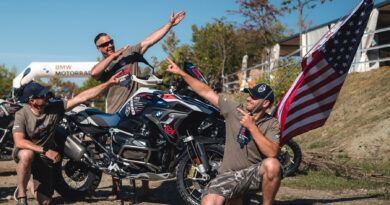 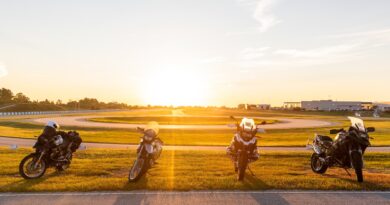