This weekend is a big one for my family. My wife Janel will be taking her motorcycle road course at Pacific Riding School in Vancouver, British Columbia. Once she completes the course, she will be able to ride with me at any speed (legally within the limit of course) and we will be one step closer to our long trip headed south. One problem: Janel suffers from severe performance anxiety.

I am sure a lot of riders are like me: “Something new!? Count me in!” A new challenge is something to be excited about—especially learning to ride a motorcycle. The adrenaline pumping through our system the first time we sit on a motorcycle or learn to countersteer is exhilarating. After that, finding the rush riding some different terrains by ripping down forest service roads or even some single track. This is what it is all about for some of us. But what about those individuals that suffer from fear taking over? Those individuals who have such debilitating anxiety it can make them unable to move, let alone ride.

Before he and his friend ruined Game of Thrones, David Benioff had a great quote in his novel City of Thieves: “Cowards and insomniacs, my people, are plagued by babble on the brain.” Basically, a lot of anxiety is created by overthinking or overthinking is caused by anxiety, and this leads to inaction. Individuals with anxiety overanalyze almost every situation, usually leaning towards what could go wrong rather than towards what could go right. When something does go wrong, no matter how minor, this acknowledges their thought process towards the negative; leading to more negative thinking. 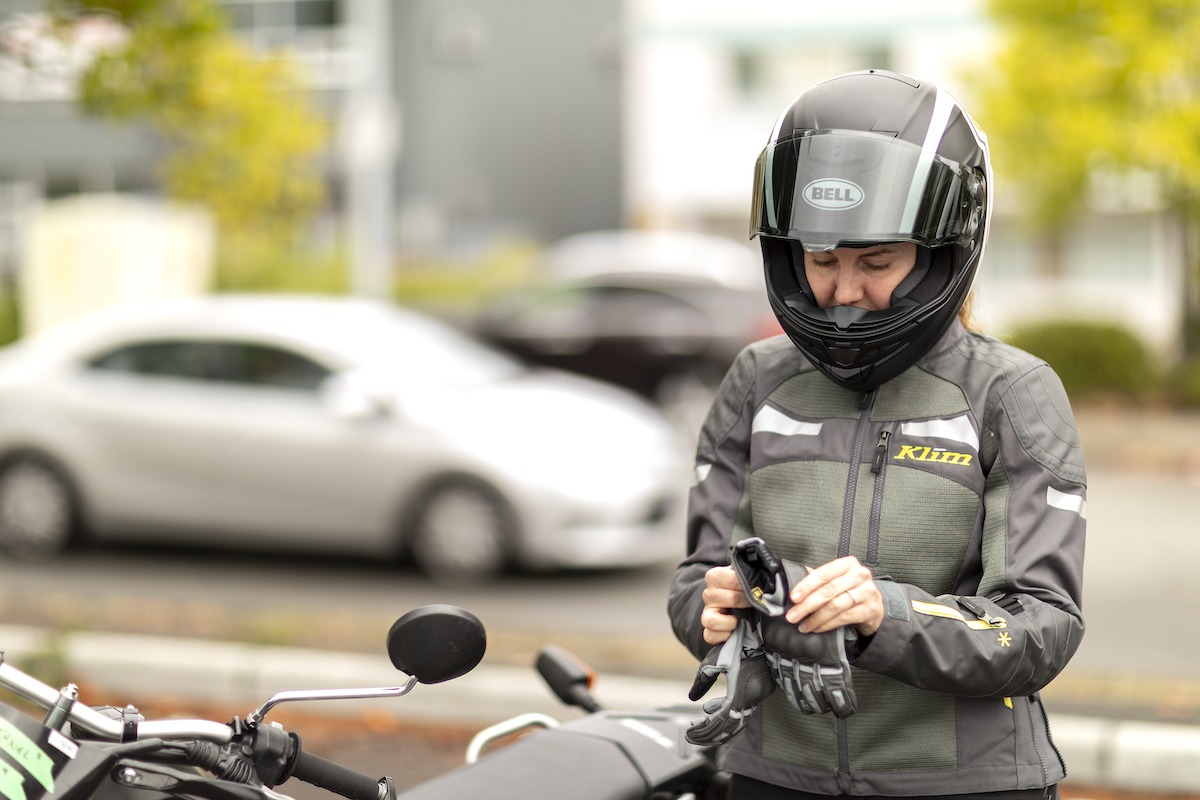 As an example, Janel was feeling nervous about the on-road part of her course and suggested we do a road ride. She had already spent about five hours riding around a parking lot over several days, not only learning how to control the motorcycle, but also how to shift gears (she had never driven a standard before sitting on a motorcycle). When we hit the road, she kept missing the shifter or revving the engine because she was forgetting to let off the throttle. Gradually, each mistake added to her anxiety, until she finally reached a tipping point where she just shut down. In my side mirror I saw her move over to the shoulder of the road. I pulled up beside her and saw the terror in her eyes. She told me to go get the car and she would wait; she was completely locked up. As each of those small mistakes accumulated in her mind, her mental focus got worse and worse until her anxiety made her completely frozen, leading to her making the correct decision to just pull over. 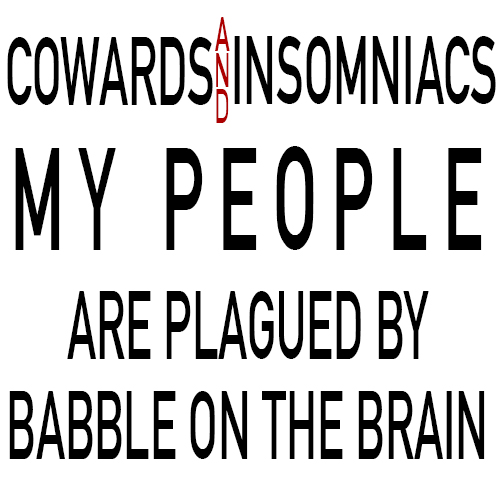 To be clear, it is not like I threw my keys at Janel and said “here you go.” We bought Janel all the best riding gear (far superior to mine, I would like to point out) and started at pushing the bike around the parking lot. We took our time; this was no sink or swim learning experience. I hoped that this slow pace would help her anxiety ease. She did so well in the parking lot—she never dropped the bike once and the cones were a joke to her—I thought a road ride would be easy. What I didn’t realize was she was juggling not only learning to ride the motorcycle, but also the weight of our entire expedition.

When Janel suggested she would be interested in riding a motorcycle, I was ecstatic. My first thought was that we could ride together all over the world, just me and my wife. How awesome would that be? Then I came up with the bright idea of riding to South America in 2022. To help with the timeline here, Janel had not even been on a bike at this point and I was already discussing a cross world trip, not only with her but also with several of my sponsors. I didn’t even consider the amount of pressure I was putting on her to learn to ride. Not only did she need to learn to ride a motorcycle, but she needed to do it now, and do it well all so we could go on the adventure of a lifetime. No pressure, right? 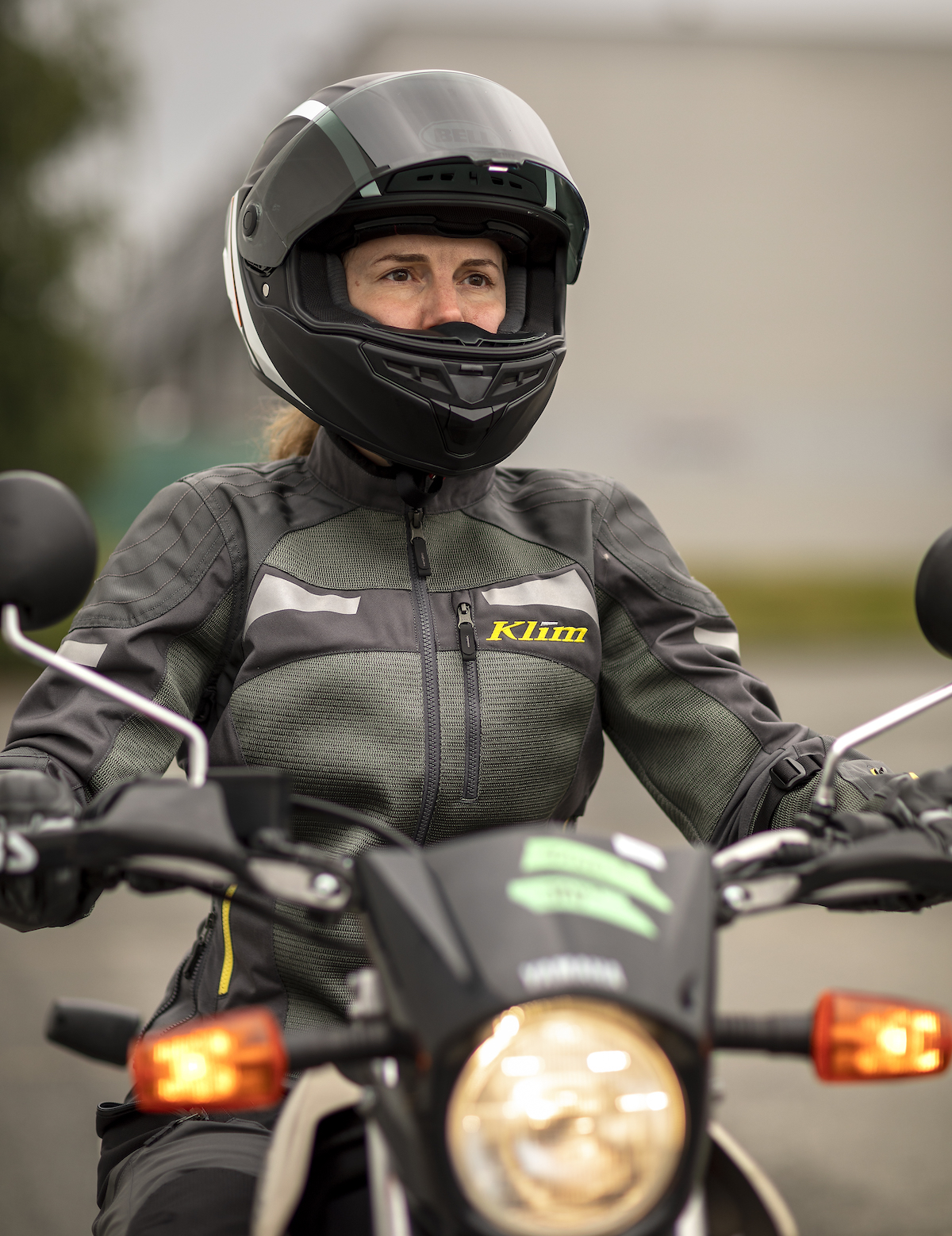 Over the past two weeks we have gone through several episodes where Janel’s anxiety has taken over and she has decided she just doesn’t want to do this. We sit and discuss it, and then she gets back on the horse (the motorcycle). With her course coming up now she is nervous, but doing her best to think positive. She wants to be able to ride the motorcycle, she is just constantly worried she can’t, even though she already has several times. She already knows she can ride the motorcycle, but she continually convinces herself she can’t. Her fear of the motorcycle leads to anxiety, which leads to her overthinking what can go wrong, instead of focusing on what has gone right. The question now becomes: How can we support people like Janel so they can enjoy the freedom of riding a motorcycle?

Flegal and Anerson (2008) and Lo, Hatfield, Wu, Chang, and Hung (2019) demonstrated that overthinking a simple task such as putting in golf can seriously impair motor control and performance, and lockup like what happened to Janel is not all that uncommon. One of the most common suggestions on how to avoid overthinking is to just do. The idea of psyching yourself out is very real; the more you think on an action the less likely you are to do that action. I am sure most of us have heard the saying “Those that do can’t teach and those that can teach can’t do.” This has been shown to be linked to the idea of overthinking; great coaches/teachers are always thinking, while great athletes/students are always doing. Other researchers have also shown that the more difficult and/or complicated the task, the more likely someone is to overthink it. I am sure we can agree that when we first started learning to ride a motorcycle, it was complicated. With learning a new, dangerous—and as stated—complicated skill such as riding a motorcycle, just doing can not only be difficult, but also dangerous.

One of the most current and popular methods to deal with anxiety (outside of medication) is cognitive behavior therapy (CBT). CBT tries to modify the behaviours that lead to problems in our everyday lives. Anxiety is something we learn. Think about that! Individuals are not born with anxiety, but have learnt it from watching others respond to situations. What they have learned is to link negative interactions to thoughts of negative self-worth and the inability to succeed at a given task (Juslin & Sloboda, 2011). The result is failure and a self-fulling prophecy, which creates future anxiety problems. CBT works to unlearn anxiety-riddled responses and instead replace them with positive responses. 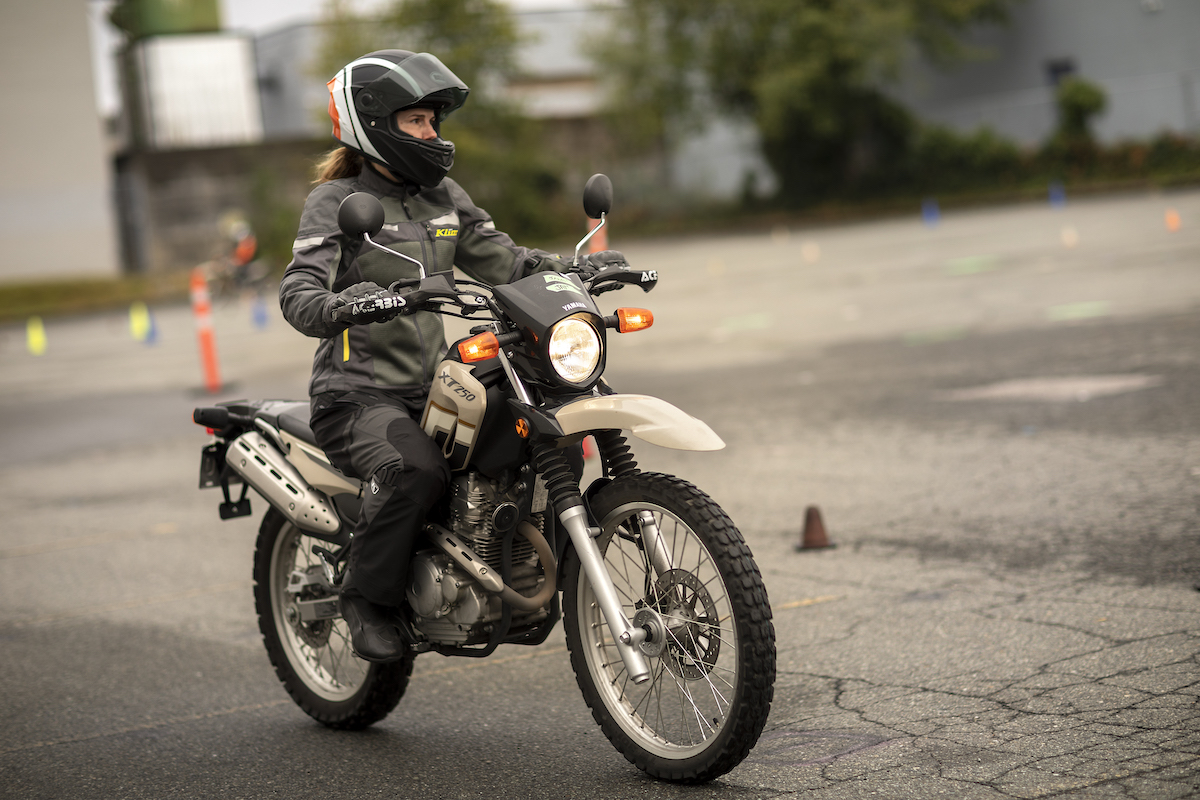 CBT works in several steps. First, a person needs to identify the fact they have anxiety (seems like admitting you have a problem is always the first step). Next, when the same person is having negative thoughts, they need to work to identify those thoughts. For example: Janel kept convincing herself she couldn’t ride the motorcycle, even though she had already done so several times. If she could identify those thoughts as just anxiety rather than reality, it can make it much easier for her to move forward. Finally, our anxiety-ridden rider will try to replace those thoughts with realistic thoughts (Stewart & Chambless, 2009). For Janel, instead of getting to the point of, “I can’t ride the motorcycle,” she needs to think something like “I have ridden the motorcycle already, and although I am not perfect, I can do it.” This all sounds great, but it takes a lot of practice. Some people can do it on their own and others work with CBT specialists to ease the symptoms of their anxiety.

Everyone has to find their own way through their anxiety. CBT works for some, others use medication, some find talking to people helps, and some are just able to do, which alleviates the overthinking. Lastly, some people never get over their anxiety. However, if you are someone who suffers from anxiety, there are options. Like many things, people on an anxiety journey are all trying to get to the same place, however, they all will take their own route.

Many of us have people in our lives that suffer from anxiety and of course, we want to help them find a healthier mindset. This is not only for their own sake, but so we can take them on the trip of a lifetime across the globe. 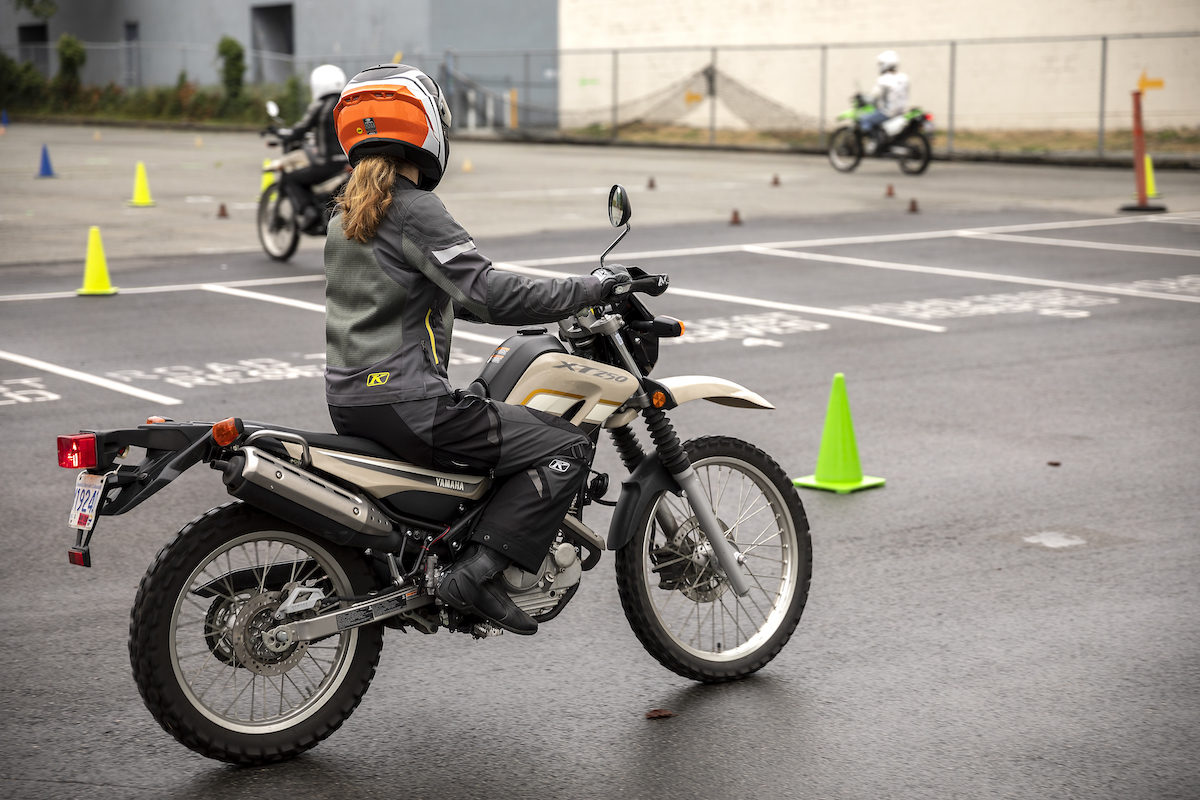 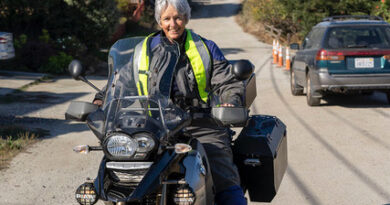 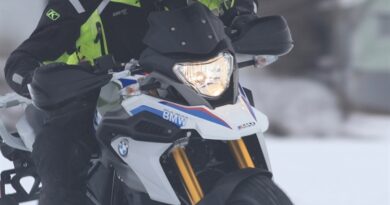 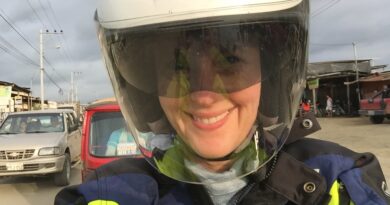 On the back of the bike