(This story is from Biketoberfest 2021. BMW will have the full line demo truck at Daytona for Bike Week ’22, which runs 3-12 March.)

I would like to thank the BMW Full Line Tour Demo Days team; they put on a great riding event at Daytona Biketoberfest 2021. It gave me the opportunity to try some of the outstanding machines BMW produces. 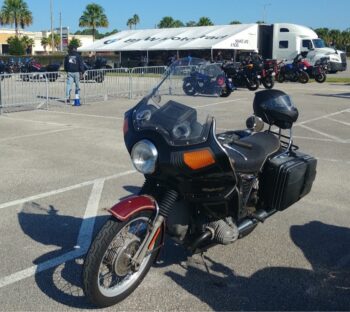 I grew up around motorcycles. My brother would buy basket-case Harleys, then rebuild them and sometimes enter them in chopper shows. My dad was a BMW fan. I have been riding since I got my learner’s permit at 15 years old in 1977 at the age of 15, and my first bike was a Honda XL 100. I rode it for a year until I graduated to a regular license at 16, which allowed an unrestricted engine size. I then started riding my dad’s ’72 R 60/5 and became hooked on BMWs. Over the years, I have ridden many makes and models of bikes, always having chosen models on the smaller size due to my height and inseam. I prefer to be able to put both feet flat on the ground; call it a quirk. I am now back to riding a BMW, a ’73 R 60/5.

My local BMW dealer, Euro Cycles of Daytona, has been trying their best to provide riders like me with the chance to test ride their inventory. However, the severe shortage of bikes being imported has left little available inventory. The new bikes coming in are bikes have been ordered for customers, not floor models.

When I heard BMW was going to demo their lineup at this year’s Biketoberfest in Daytona, I signed up immediately. Needless to say, I was not disappointed. 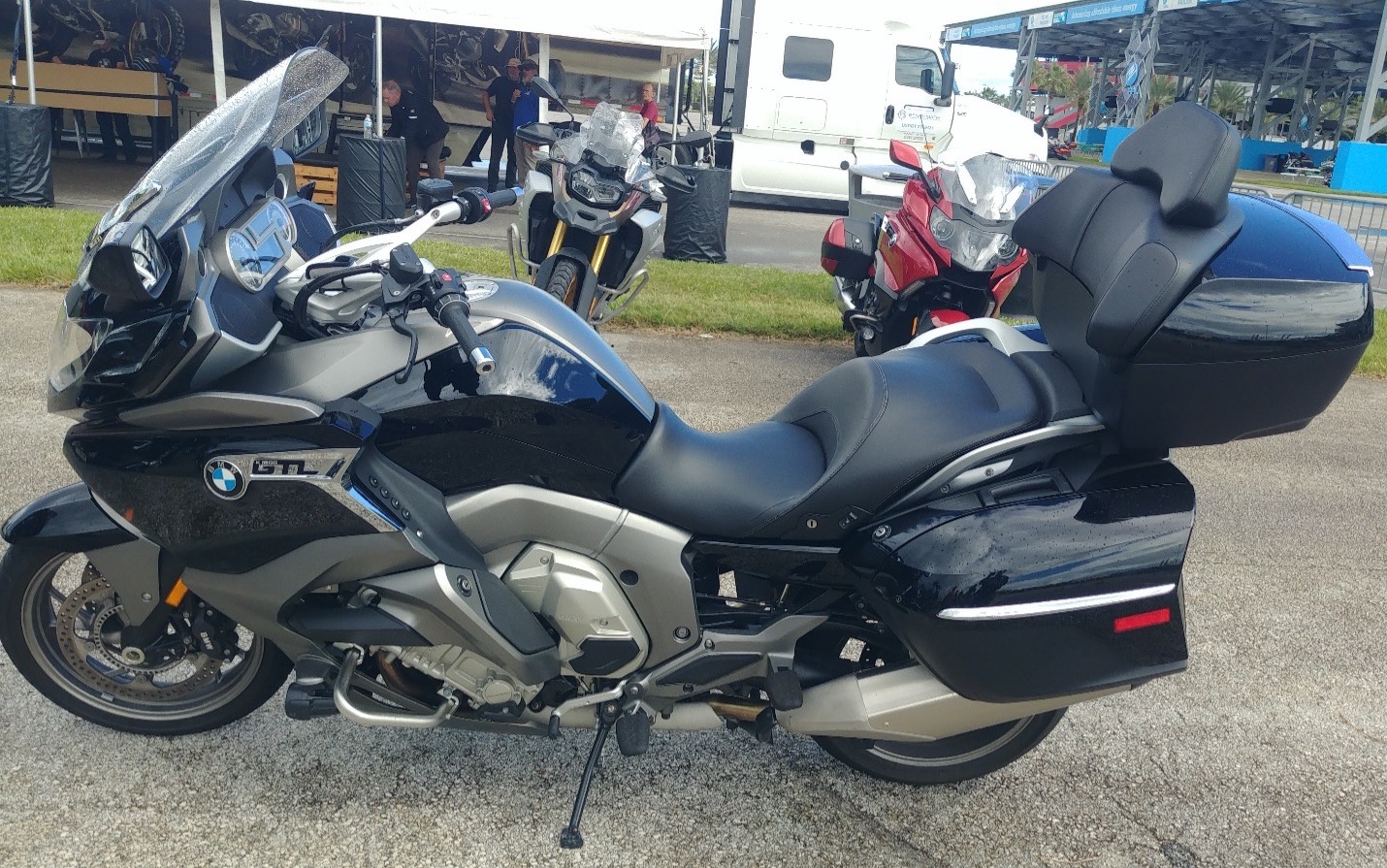 First up was the K 1600 GTL. I must say I approached this bike with some trepidation, as I had heard it was a big, heavy bike, and my short stature had me concerned. When I threw a leg over, settled into the saddle and lifted it off the side stand, I found I could easily place both feet flat on the ground; by standing up just a tiny bit, I had both feet flat.

The GTL is big and heavy, but I fell in love with it immediately. Before even starting the engine, I could feel how easy it was to balance. Anyone who has ridden one of these wonderbikes knows what I mean when I say the engine just purrs. At idle, I couldn’t even hear it over the other bikes, but I sure could feel it. Taking it out on the road showed it truly is a finely crafted machine. Easy clutch action, responsive throttle, smooth acceleration, smooth shifting and nimble. On the road, the GTL feels lighter than my Slash 5. You can tell she is no lightweight by how firm she sticks to the road, and crosswinds don’t make her bob and weave, but the balance makes riding almost effortless. Riding in city traffic was easy. Taking a few turns at speed felt more like a sport bike then a luxury tourer. A short blast on the highway shows just how quickly you can get up to speed. The only problem I had with the GTL, other than having to give her back, was reminding myself the transmission has six gears, not just the four I am used to. If I was to own this bike, the only thing I would want to change is setting the handlebars back about an inch. I had no trouble with them the way they are, but for long rides, I think the stock location would be a bit tiring for me, again because of my short stature. 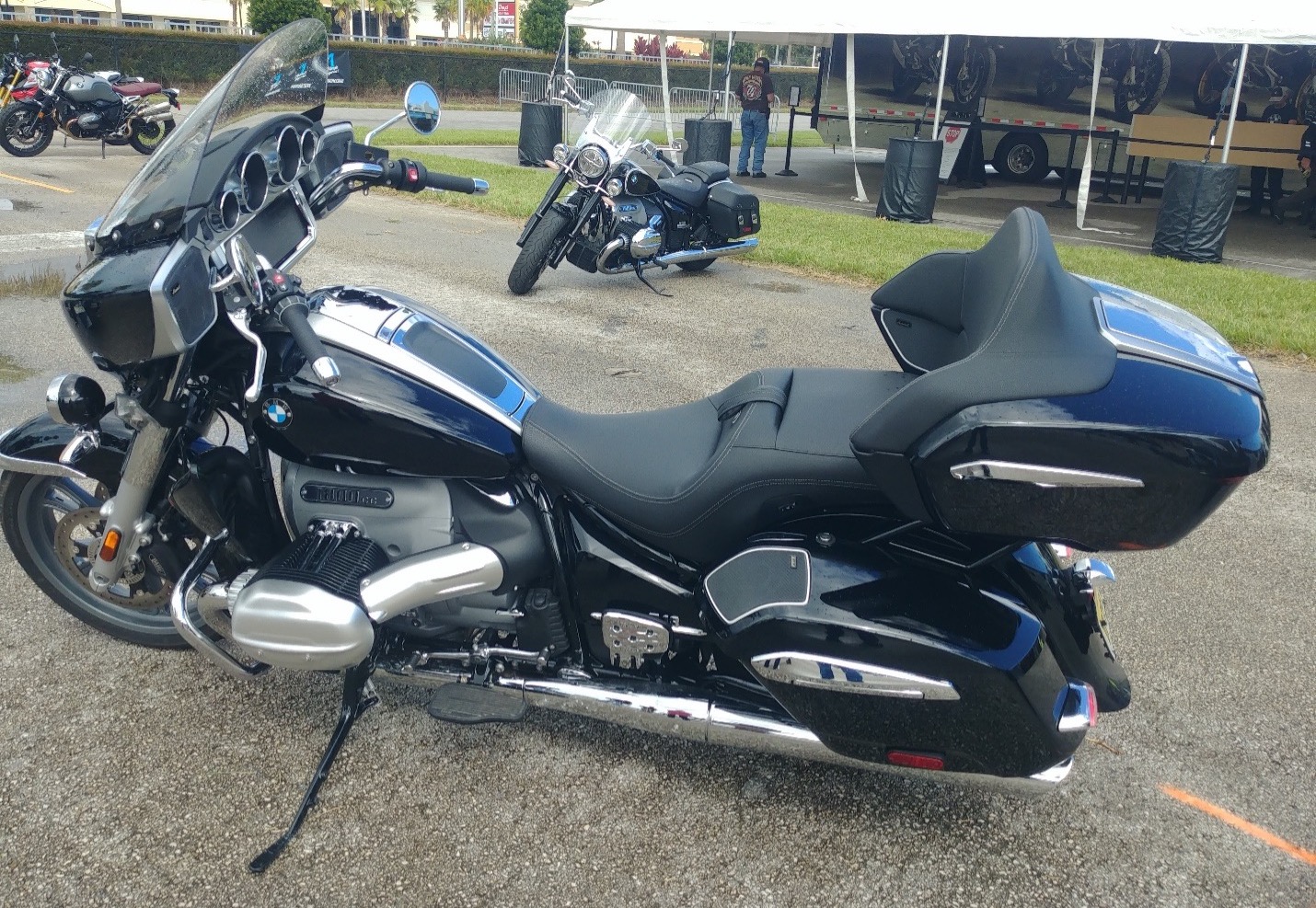 Next up was the R 18 Transcontinental. When I say this bike is a beast, I mean she is big, heavy and powerful. The Transcon was easy for me to flatfoot while sitting firmly in the saddle. Taking it off of the side stand takes some effort, as this is a heavy bike, but once upright, the bike is well balanced. The handlebars were a little better for my reach. When you start this bike, you definitely know it is running. From the exhaust note to the side-to-side vibration, you know the R 18 is descended from the same line as my Slash 5.

Rolling on the power gives you that classic torque motion boxer engines are known for. The heel/toe shifter took some getting used to, as the levers are set a bit high for my comfort. I found myself having to lift my foot up higher than I thought I should have to reach the levers, but I still kept missing the upshift lever because of how small it is. If I was to own this bike, I would adjust them lower and replace the upshift toe with a slightly longer one. On the road, this bike is smooth and comfortable, handling traffic, curves and highway speeds easily. The Transcon is a real pleasure to ride! 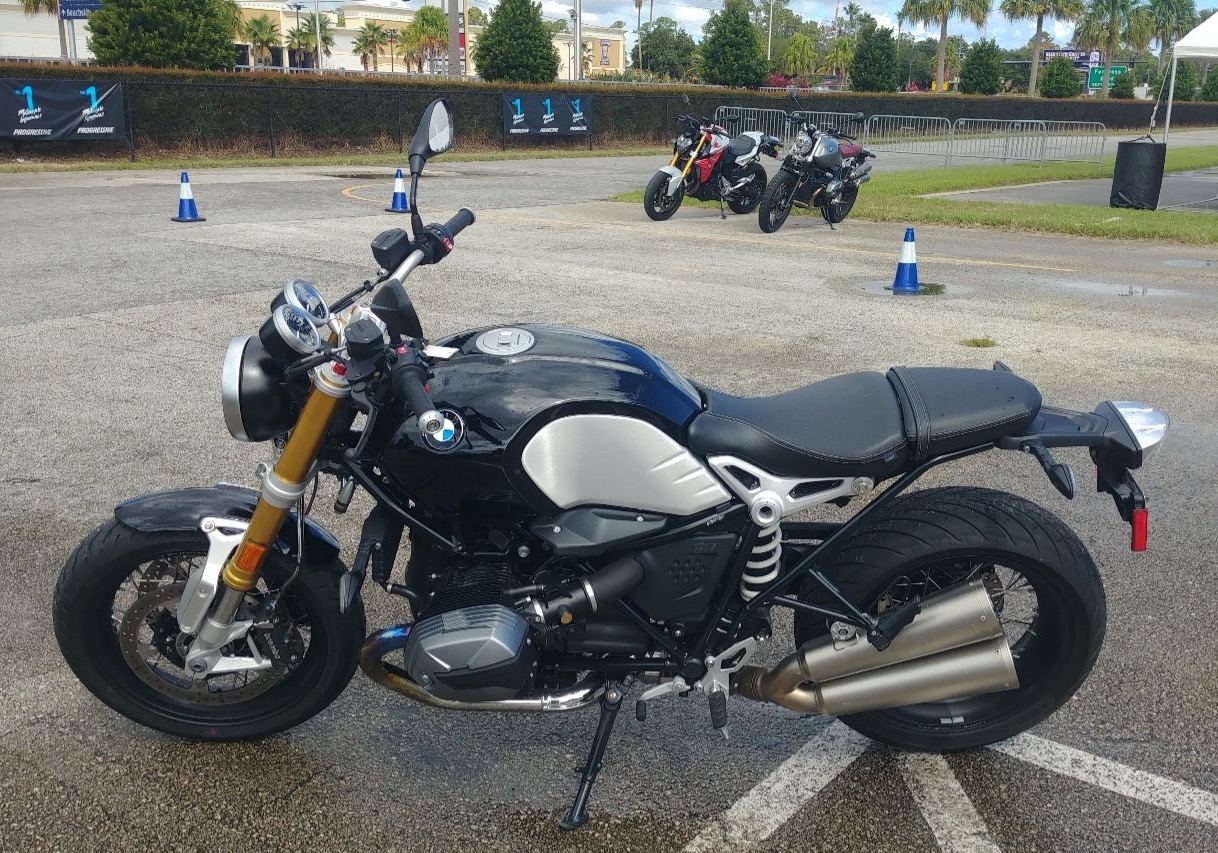 The R nineT Heritage was the only naked bike I rode. It was also the closest to what my Slash 5 was when I first got her. Light, agile and fun to ride. But when you hit highway speeds, the wind blast on my chest reminded me why I put a fairing on mine for long highway rides. This is the bike I would get for my daily rider; it’s easy to get in and out of traffic and has the power to make it fun. 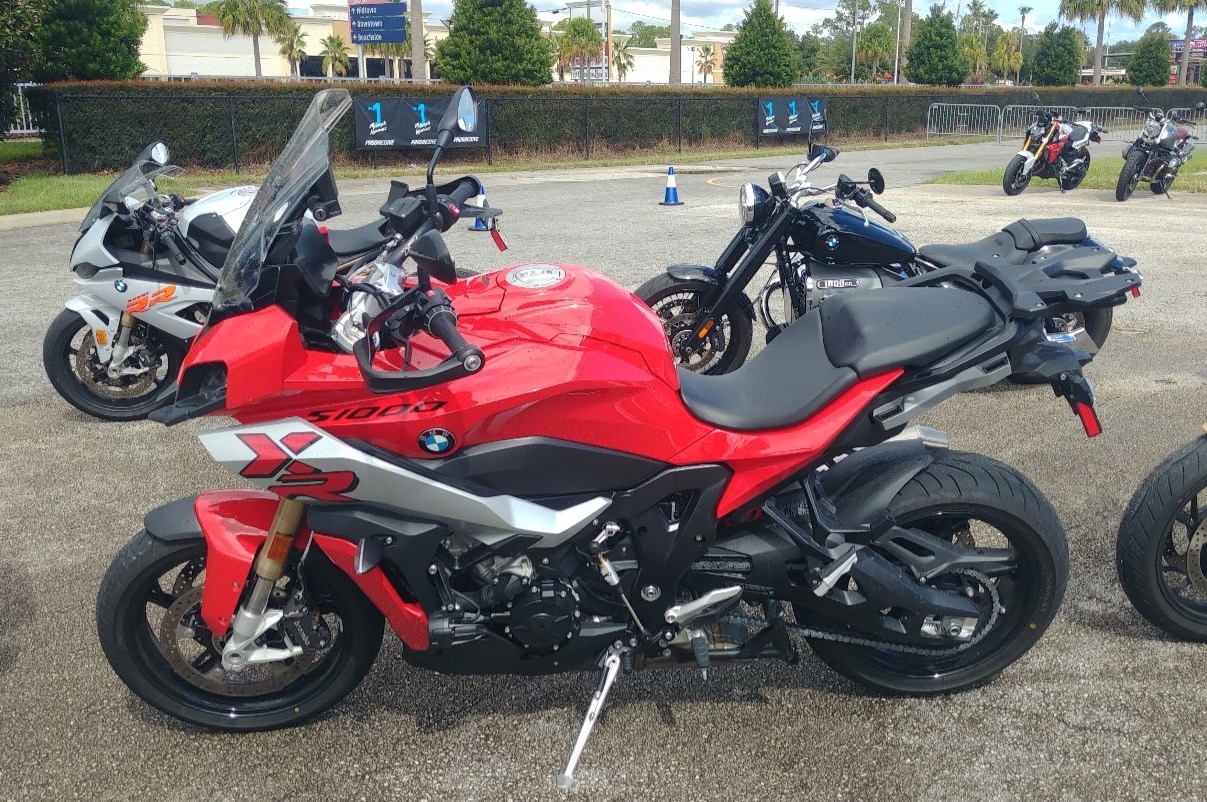 I would describe the S 1000 XR as having a riding position somewhere between the upright riding position of a standard and the sport bike crouch. The inline four has, for me, an odd buzzing feeling, nothing at all like the boxers I am used to. This is another fun bike, with just enough of a fairing to keep the wind from blasting you out of the seat at highway speeds. 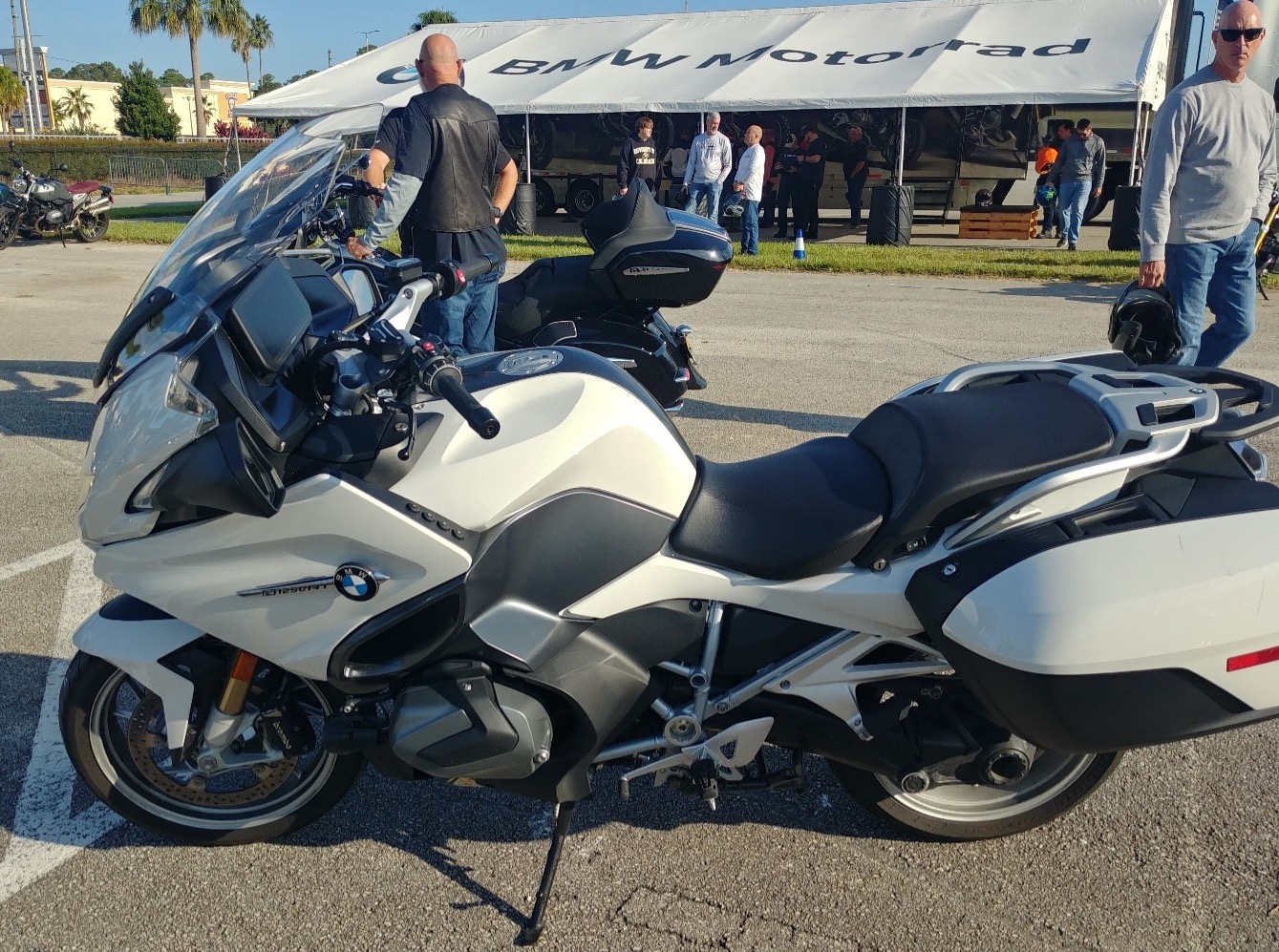 The R 1250 RT is the bike I was hoping to like. A cross between a sport bike and touring machine, with the famous boxer engine. In most ways, this bike is exactly what I was expecting. What I was not expecting was not being able to put both feet on the ground at the same time. Between the seat height and its width, I could only stand with only one foot flat on the ground by sliding off to one side. When fully seated, I could only touch my toes on one side by slightly leaning the bike to one side. Most riders would not have this problem, by I am height challenged. On the road, this bike is what I expected: Smooth! The torque feel from the engine under acceleration made the RT a pleasure to ride. The only problem was a whistling at any speed over 30 mph. With the windscreen up, down or anywhere in between, I still heard it. I am not sure where it was coming from, as I didn’t have enough time to track it down. Hopefully, this is just a quirk of this particular bike, and not something that carries throughout this model. 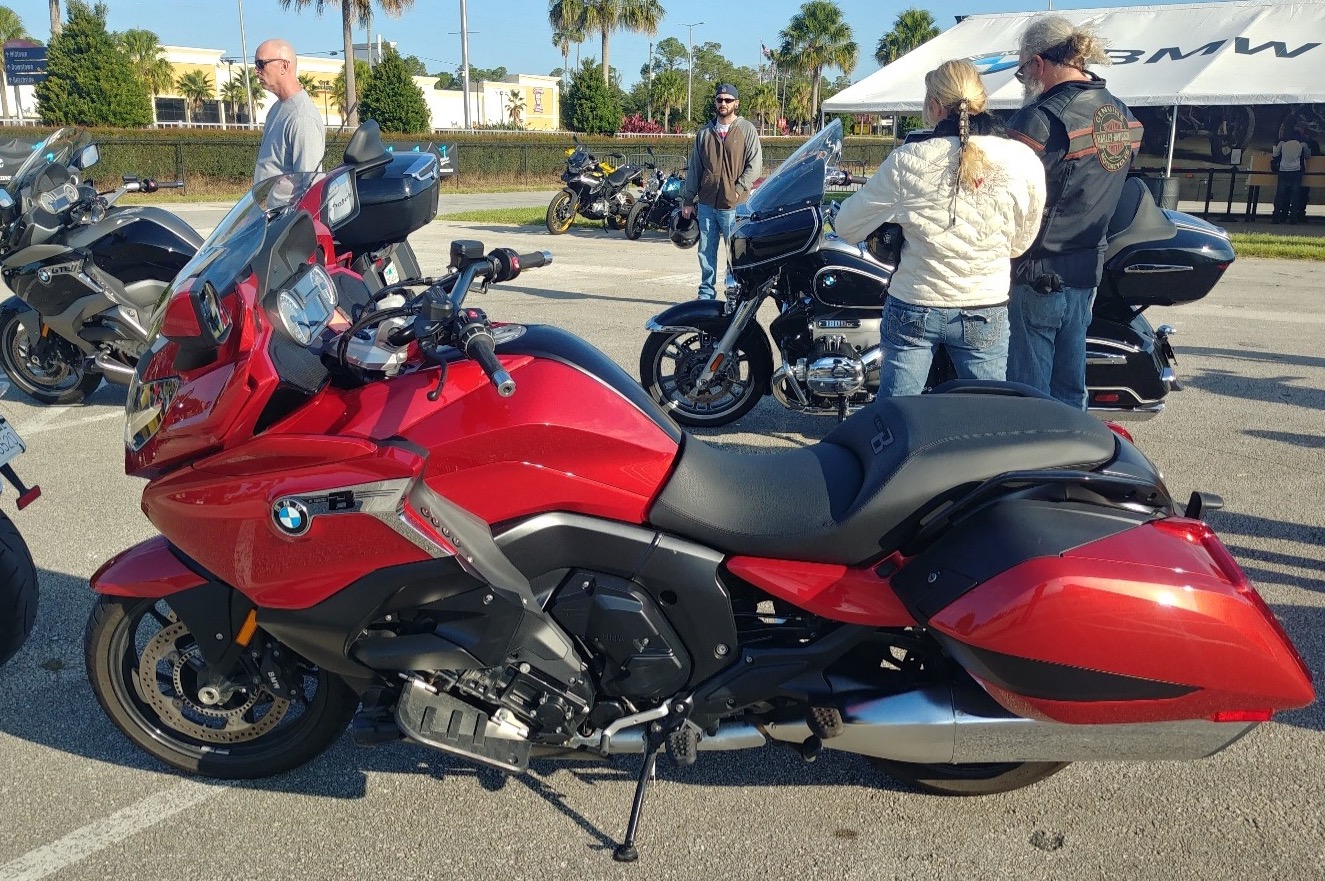 Everything I said about the K 1600 GTL applies to the Bagger. I am not sure about the ride height, but to me it felt slightly lower; it may have just been my imagination. With the addition of the optional top case, this is another bike I could see myself doing long distance touring on if I was going solo. 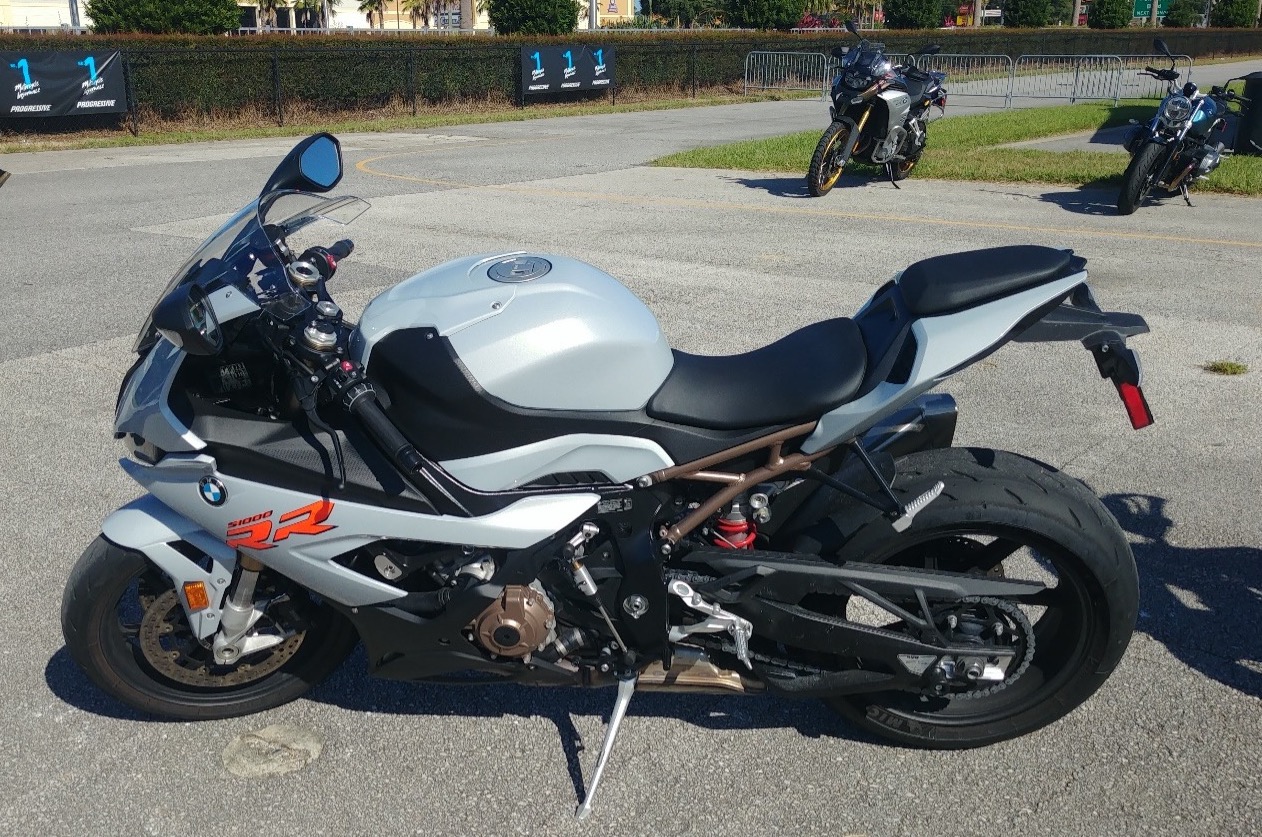 The last bike I rode was the S 1000 RR, a true sport bike complete with full racing crouch. The RR is a bit tall for me, as I was on tiptoes any time we stopped. The RR would easily get me in trouble. I rolled on the power and was up to the speed limit before I had a chance to blink. The RR is quick, and I didn’t even nail the throttle! I can only imagine what would have happened if I did so. Cornering is extremely fun, letting me confidently roll on the power in the turns without fear of anything breaking loose. I would love to take one of these bikes to a track day and see how far I could push my limits, as I know I would reach mine before the RR came close to reaching its limits.

If I had to choose one bike to take home with me, it would be without a doubt the K 1600 GTL.

I enjoyed the two days of riding at Daytona Biketoberfest ’21 thanks to BMW Demo Days. I encourage anyone that can get to one of these events to do so, as the opportunity to try out multiple bikes on the same day easily allows you to compare them. I am looking forward to the next one, as I will be there trying out some more BMW bikes.

As it is plain to see, I am not a motorcycle journalist, nor did I sleep at a Holiday Inn Express last night. I’m just some guy who has been around motorcycles most of my life. I’ll just say that if BMW of North America needs some average guy to do a long-term test riding evaluation on a GTL, I am available. 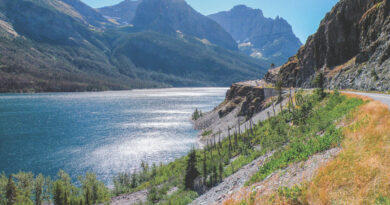 Working off the top half of your tank